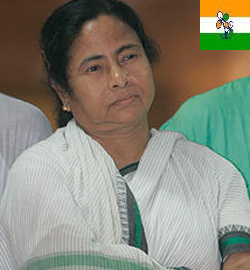 The Indian state of West Bengal is made up of 23 administrative districts that are grouped into 5 divisions. Each division consists of 3-7 districts. A divisional commissioner an officer of Indian Administrative service (IAS) is responsible for heading the administration of a division; the Divisional minister is also responsible for the collection of revenue and maintenance of law and order in his or her division.

The General election to the Legislative Assembly of West Bengal for 292 constituencies of West Bengal was held between 27 March to 29 April 2021 in eight phases. Voting for the two remaining constituencies was delayed and was scheduled to be held on 16 May 2021. Election schedules were announced on 26 February 2021 and the election was held in eight phases from 27 March 2021 to 29 April 2021 and votes were counted on 2 May 2021.
The COVID-19 pandemic became an election issue. The Government of West Bengal was accused of "fudging" the count of positive cases and deaths in the regions. The AITC-led state government and BJP-led union government blamed each other for the surge in COVID-19 infections over the course of the campaign.
The national ruling party BJP's leader Narendra Modi was accused of holding rallies and flouting COVID-19 rules despite a second wave of the pandemic. Tens of thousands of people attended these rallies. Epidemiologists called it a super spreader event.
After several instances of violence, threats and murders even before the polls were announced, the Election Commission of India and Home Ministry ordered twelve companies of central forces to be deployed in West Bengal from 20 February. At least 125 more central troops were ordered to reach West Bengal on 25 February to ensure law and order in the poll-bound state. The Election commission said that forces will lay stress on area domination, especially in sensitive zones.
West Bengal has 294-member Assembly. In 2016, the Trinamool Congress had won 211 seats, more than what it had got in 2011. In this election, the BJP emerged as the second biggest political force in West Bengal. In 2019, the BJP won 18 of 42 Lok Sabha seats with nearly 40 per cent vote share.
Mamata Banerjee-led TMC has returned to power for the third term with a landslide win in West Bengal.A cliffhanger was predicted in West Bengal, but it ended up being a one-sided affair with the TMC winning handsomely with 213 seats. While the TMC managed to better its tally, the BJP which was hoping to form the government ended up with 77 seats, 73 more than its 2016 tally.
The Congress and the Left which fought the battle together put up its worst ever performance in the state and did not manage to open its account. To find out how the battle went down, do follow our West Bengal Election page.
Bharatiya Janata Party (BJP) candidate Suvendu Adhikari has defeated West Bengal chief minister Mamata Banerjee from the Nandigram hotseat by a margin of 1956 votes, the Election Commission has finally confirmed. Adhikari was once a close aide of Banerjee and jumped boats and joined the BJP just a few months ahead of West Bengal assembly elections.

In 2011, the Trinamool Congress opened a new chapter in Bengal’s political history by defeating the CPI-M-led 34-year-old Left Front government. The political equations since then have drastically changed.
Following the installation of the Narendra Modi government at the centre in 2014, political calculations in Bengal, once a Left bastion, started to change. The pace accelerated after 2016. By then Bharatiya Janata Party (BJP), which till then was a political outlier, came to replace the CPI-M as TMC’s primary opposition. The BJP’s vote-share shot up from 6.14% in 2009 to 17.02 in 2014.
The TMC had clinched 34 seats with 39.65 percent of votes in 2014. Though the Left front pocketed 29.71 per cent votes, it could manage just two seats. From a seat count of two in the 2014 Lok Sabha elections, the BJP has increased its tally to 18 in 2019. Equally, if not more, impressive is the increase in its vote share from 16.8% in 2014 to 40.25% in 2019.
Mamata Banerjee’s TMC was Thursday facing massive headwinds in key battleground state of West Bengal where it is locked in a neck-and-neck fight with the BJP, with the state’s ruling party leading in 22 Lok Sabha seats and the challenger saffron outfit in 19. According to latest Election Commission figures, the BJP was also the main contender in 21 of the 22 seats where the Trinamool Congress was leading.
The saffron party was giving the TMC a run for its money even in terms of vote share having polled 39.81 percent of votes counted so far. The TMC has clinched 43.8 per cent. The four-party Left Front, once a formidable force in the state, has garnered a measly 7.8 percent of votes so far, and its candidates are leading in none of the state’s 42 Lok Sabha seats.

Poverty: West Bengal is India’s fourth most populous state in India with 91 million people, a fifth of who are poor. Although poverty reduction in the state was faster after 2005, pockets of high poverty still persist within the state. What’s more, after 2005, the state’s economic growth, which is driven mainly by services, has been weak. So much so that West Bengal grew at an even slower pace than the country’s other low income states. Furthermore, consumption inequality, which increased marginally after 2005, is close to the national average.
Employment and opportunities: West Bengal's unemployment rate increased 10.5 percentage points, rising to 17.4% in Apr 2020, according to a survey conducted by the Centre for Monitoring Indian Economy (CMIE). Over a longer time period, unemployment has moved from 4.6% in Oct 2016 to its current rate.
Corruption: Post Saradha scam in which lakhs of investors had been duped and Narada sting operation, which has purportedly shown some leaders accepting bribes, the issue of corruption has evolved as the main poll plank for the Congress-Left Front alliance, apart from "restoration of democracy" in TMC ruled Bengal.

There was a tough battle between Communist Party of India [CPI(M)] and the Bharatiya Janta Party (BJP). TMC won twenty nine wards at Haldia, twelve at Cooper's Camp Notified Area, fourteen of sixteen wards at Nalhati, thirteen of fourteen wards at Buniyadpur, twelve of sixteen wards at Dhupguri and seventeen of eighteen wards at Panskura Municipality. TMC won four seats uncontested- two seats in Panskura municipality, one seat in Durgapur and one seat in Cooper's Camp Notified Area, after the oppositional candidates withdrew their candidature. While the BJP managed to win six wards- four wards in Dhupgiri, one ward in Panskura and one ward in Buniyadpur.

The politics for power witnessed different shades amidst the elections. Despite reports of violence and unrest in Durgapur, elections were not curtailed by the State Election Commissioner, A K Singh. The circumstances on Sunday were violation of the effective conduct of elections. Amidst violence, incidents of setting vehicles on fire and stone pelting at the police, the oppositional parties accused TMC of sabotaging West Bengal Civic Body Elections. The oppositional parties demanded cancellation and repoll of elections and accused TMC of resorting to hooliganism and vandalism.

The West Bengal Assembly Election 2016 was held over a month in six phases from 4 April to 5 May. The overall voter turnout was a little above 80%. After a long wait, results were finally declared on 19 May. Incumbent chief minister Mamata Banerjee and her party Trinamool Congress emerged victorious with a resounding majority. Having toppled the 34-year old Left Front government in the historic 2011 Assembly elections, Mamata's party managed to replicate its success with a better performance in 2016. Unlike 2011, when the TMC contested in alliance with the Congress and won 184 seats, it fought alone against the Left-Congress combine this time and bagged 211 seats out of the total 294 assembly seats. The Congress was a distant second with just 44 seats while the Left got 33.

The Trinamool Congress has decided against forging any electoral tie-up with other parties. Meanwhile, the CPI(M)-led Left Front has arrived at an ‘electoral understanding’ with the Congress though no alliance has been declared officially. The BJP is an independent third contender in the fray.

West Bengal, one of the India's most populous states, has held regular elections since the constitution of its first Legislative Assembly in 1952. The state has a unicameral legislature. The Vidhan Sabha or the Legislative Assembly has 295 members out of which 294 are directly elected and one member is nominated from the Anglo-Indian community. The state assembly had 240 members in the first Vidhan Sabha and 251 in the second Vidhan Sabha. The number gradually increased to 295 in the eighth assembly in 1977. The tenure of the state assembly is of five years unless it is dissolved.

West Bengal is represented in the Indian parliament by 42 directly elected members in the Lok Sabha or the lower house and 16 members in the Rajya Sabha or the upper house. The state also holds elections for the local bodies such as the Municipalities, Zila Parishads and Gram Panchayats.

The main political parties in the state are the Communist Party of India (Marxist) (CPM), and the Indian National Congress (INC). The All India Trinamool Congress (TMC) was formed in 1998, and is now a major regional party of the state.

In the Lok Sabha elections in 2014, the TMS won 34 seats and the CPM won only two seats. The INC won four seats.

The main national parties of the state are: The main state parties are:

The All India Trinamool Congress (TMC) with 184 seats formed the government. The CPI won two seats and the CPI (M) took 40 seats. The INC got 42 seats. Mamata Banerjee of the TMC formed the first non CPI (M) government in 34 years.

The Speaker of the current Legislative Assembly is Biman Banerjee. The Deputy Speaker is Sonali Guha Bose. The Leader of the Opposition is Surjya Kanta Mishra.

The Supreme Court passed a law in the year 2013 by which all ballot papers and EVMs will now include a "None of the Above" (NOTA) option so that the public has the freedom to not vote for any of the candidates without compromising their anonymity. However, NOTAs will not affect the outcome of the elections and will be considered invalid. Check the members of Legislative Assembly (MLAs) of West Bengal...

Since the Independence of India, West Bengal has been governed by a total of eight Chief Ministers, of whom Jyoti Basu of the CPM governed for 23 years, making him the country's longest serving Chief Minister. Of all previous Chief Ministers, five belonged to the INC and two to the CPM.

Governors are the nominal heads of a state, appointed by the President of India. Since Independence, West Bengal has had 27 governors. The current governor is Keshari Nath Tripathi, who assumed office in 2014. Each governor serves a term of five years, unless circumstances require otherwise. The governor of West Bengal also acts as the Chairman of various organisations like the Victoria Memorial Hall, the Eastern Zonal Culture Centre, the West Bengal's Indian Red Cross Society and the Indian Museum. As an ex officio, the governor also assumes the post of the Chancellor of all the 14 universities of the state.

The Chief Electoral Officer (CEO) of West Bengal is Sunil Kumar Gupta. He was appointed on 31 March 2010. A native of Uttar Pradesh, Gupta is an IAS officer of the 1987 West Bengal cadre. He did his B.Tech. from IIT Kanpur, post graduation in Civil Engineering from the State University of New York, and several other courses in development and computer applications. Read More

The 16th Lok Sabha elections saw a political change in West Bengal. The state has 42 parliamentary constituencies and in the 2014 elections, 34 seats were won by the All India Trinamool Congress (TMC), while the Communist Party of India (Marxist) (CPM) won only two seats. The General Elections 2014 took place in West Bengal in five different phases. After TMC won the elections, Mamata Banerjee became the Chief Minister of the state. In the 2009 General Elections too, the TMC came out as the victorious party after winning 19 seats. The opinion and exit polls had also predicted that TMC would continue to win the 2014 elections as well. During the 2009 General Elections, the TMC party won 19 seats in the state, followed by CPM which won nine seats.