The current scenario of politics suggests that people are more educated in terms of making a decision to choose a government. The elections following 2017 have shown that the voters of India are clearly able to distinguish between the politics of the state and the national politics. It is evident from the winning spree of the Bharatiya Janata Party since 2014 for many state elections of India, largely because of the Modi wave. The opposition parties were reduced to their all-time low in Indian politics. Nevertheless, the opposition made a rebound since 2017 especially INC, while BJP lost many state elections. But the voters once again have surprised the parties by re-electing the Narendra Modi led government in the center. By winning more seats than the previous Lok Sabha election, PM Narendra Modi has emerged as the most powerful leader on the national front.

Types of Elections in India
Following are the major types of election in the country: 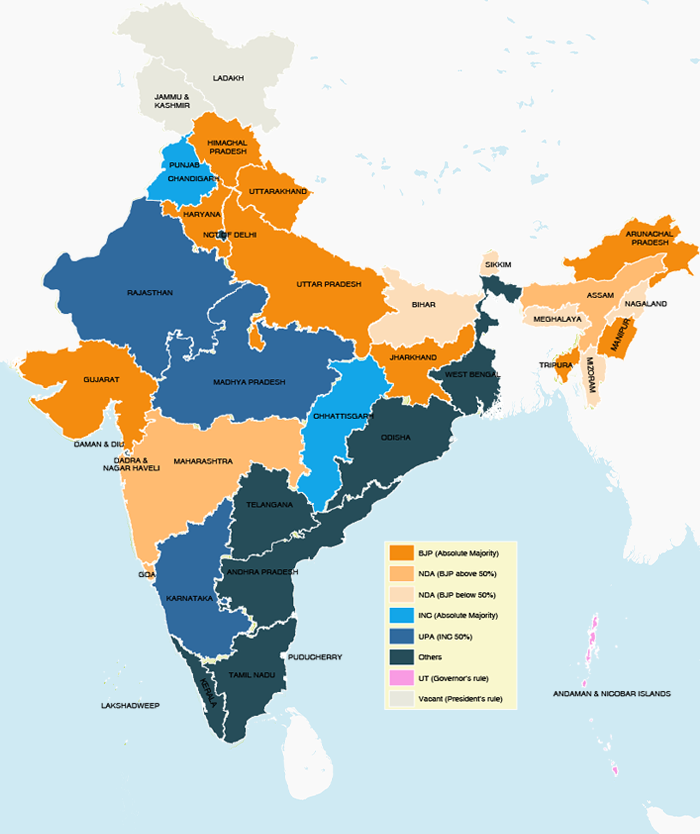 India is the largest democracy of the world and the elections of India are the largest election exercise. The people of India directly elect the Prime Minister by participating in the General/ Lok Sabha elections every five years.

Since India has adopted the bicameral system of legislature, the parliament is composed of a lower house (Lok Sabha) and Upper House (Rajya Sabha). The Federal government of India clearly distinguishes power between the central and the state governments.

The Parliament of India has 2 houses: Lok Sabha and Rajya Sabha. Lok Sabha: The members of Lok Sabha elect the Prime Minister of the country. It is also known as the lower house and comprises a total of 552 members. From states, 530 members are selected, while 20 members in the Lok Sabha represent the union territories. The members of the Lok Sabha (MPs) are elected every 5 years.

The election commission of India is the apex and powerful body that administers elections. It employs Electronic Voting Machines (EVMs) for the election process. The elections for 17th Lok Sabha were scheduled between 11 April to 19 May 2019. BJP emerged as a single largest party winning 303 seats and Narendra Modi once again became the Prime Minister after 2014.

A person fulfilling adult suffrage is eligible to vote as per the article 326 of the constitution. Based on the adult franchise, an adult in India can participate in the voting process upon fulfilling the other eligibility conditions set by the election commission. Earlier, the age was 21 but it has been reduced to 18 in 1989. A person who is not a citizen of India or has been barred from voting by law for indulging in malpractices can not participate in the voting process. Once a citizen enrolls as a voter, a voter ID card is issued by the election commission of India. With the order of the Supreme Court, the ECI has given the option of NOTA (None of the above) for anyone who wishes to participate in the voting but feels that none of the candidates deserves to be elected.

For an election at any level of the federal model, the regions are divided into certain ‘parts’ by the delimitation commission of India. These parts of the regions are called as ‘constituencies’ for Lok Sabha/ Rajya Sabha/ State Legislative Assemblies. While these parts are called ‘wards’ in case of municipal corporations. A representative is chosen by the people of this area. In order to vote, a person must register his name in the Voter’s list. Many candidates participate in the election, which can either be from a political party or an independent candidate. A candidate has to be approved by the election commission after filing the nomination. The candidates campaign for the election and campaigning stops before 48 hours of the election. The entire process is administered by the election commission of India and it announces the election results on the scheduled dates.