The state of Assam is a very important state of India when it comes to the politics, and governance of the country. From the very first day of being a state, Assam had an impact on the politics of the country, and it has always been in the news for that. The state has a government of its own, which is, under the government of India, runs the state, and is responsible for every development actions of Assam. This is one reason why the state has to organize an election periodically and select a new government or keep the one that ran the state for last 5 years.

The election of Assam is conducted under the rules of Indian constitution, and so the arrangements require proper actions from the central government of the country. The state has a total of 126 constituencies. The political parties of Assam put their candidates on the seats in the election. Congress is the most powerful political party in Assam in terms of results, and it has won the election back to back in last 3 years. Assam has other political parties putting their candidates in the election too, in different constituencies of the state. However, Congress won convincingly in the last election. Assam sends 14 Member of Parliament(s) to the Lok Sabha.

There are 14 Lok Sabha seats in Assam. The elections were held between April and May 2019. BJP won 9 seats while INC and AIUDF got 3 and 1 seats respectively. There was one Independent winner candidate. The turnout of 81% was recorded.

2016 Election Result The 2016 Assam Assembly election was held in two phases on 4 and 11 April in 126 constituencies of the state legislature. The overall voter turnout was 84.72%. Polling statistics indicated that there was a high degree of anti-incumbency working against Tarun Gogoi and Congress which had been in power in the state for three consecutive terms since 2001. The BJP capitalised on anti-incumbency and forged crucial alliances with regional heavyweights BPF and AGP. Results were declared on 19 May and the BJP emerged victorious in the frontier state. The BJP toppled Gogoi's Congress government by winning 86 of the total 126 Assembly seats. The election outcome confirmed that the Assamese electorate had voted for change. BJP leader Sarbananda Sonowal was sworn-in as the chief ministe on 24 May 2016. 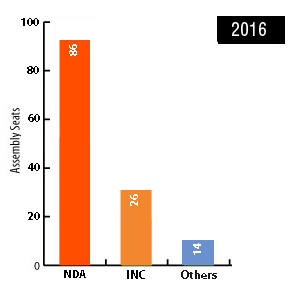 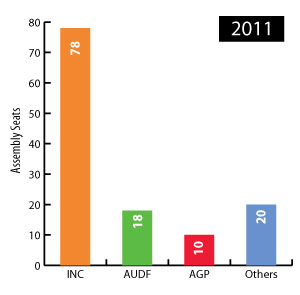 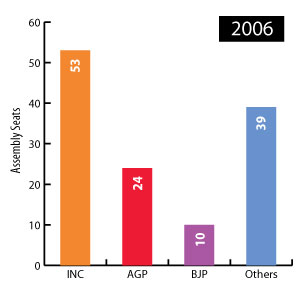 Himanta Biswa Sarma, a former Congress leader, was given the portfolio of Finance & Forest. He is considered the most successful health and education minister that Assam ever had. Now, that portfolio will be handled by Hiten Goswami. Ronjit Dutta, former State unit president of the BJP, has been given the responsibility to take care of the Public Works Department. Aminul Islam Laskar, perhaps the only Muslim candidate who has won from BJP, will handle the Minority Development & Haj.

The two AGP members who have found place in Sonowal’s cabinet are Atul Bora and Keshab Mahanta. Although they are veteran politicians, but they had never been ministers. Atul Bora (Senior) will handle the Public Health Engineering department and Atul Bora (Junior), who is the president of the AGP, will take care of the Irrigation department. Chandra Mohan Patowary, who had served as health minister and agriculture minister during AGP governments, was also inducted in the cabinet.

Other Members in Cabinet

Promila Rani Brahma, a senior Bodoland People’s Front (BPF) leader, has been chosen as the Minister of Welfare of Plain Tribes and Backward Classes.

The Congress has not engaged in any pre-poll electoral alliance though it seems open to that option once the results are out. The BJP already has the Bodoland People’s Front (BPF) on its side. It has also forged a crucial tie-up with the AGP. The All India United Democratic Front (AIUDF) has struck an alliance with JD(U) and RJD to fight the ‘communal’ BJP together in Assam.

MLAs Lists Assam holds a unicameral legislative structure that is comprised of 126-member Assam Assembly. These members are elected for a period of 5 years and the assembly is led by the Speaker who is the often the member of ruling party. Sarbananda Sonowal is the Chief Minister of the state

The state of Assam has one elected legislature which meets in Dispur. The Chief Minister (CM) is the elected head of the government and reports to the Governor of Assam. The Governor is appointed by the Central government and has the power to remove the CM. The state is divided into three regions. Every region is headed by a commissioner. Under each commissioner, there are several administrative units called Districts.

Issues in the State

Assam has been mired in a number of problems for several years. The issue of illegal immigrants and ensuing violence is still fresh in the memory of not just the Assamese but every Indian citizen. However, as detailed analysis of the issue revealed, the problem is just a symptom of a larger malaise.

The main issues burdening the Assamese people are inflation, unemployment and rampant corruption. Though unemployment is a problem everywhere, it has become a major issue in lower and central Assam. Other issues affecting the locals are lack of basic infrastructure like electricity, motorable roads, drinking water and surge in militancy. No wonder, the influx of illegal immigrants from across the border puts bigger pressure on limited resources. This has seriously affected the law and order situation in Assam and become a major roadblock to the state's development. The people of Assam are losing patience with the rising corruption and Congress' token efforts to rectify the situation.

AIUDF : The All India United Democratic Front or AIUDF is an Assam-based political party and is also spreading its reach in other states such as Odhisa, Mizoram, West Bengal, Jharkhand, Maharashtra, Bihar, Chhattisgarh, Rajasthan, Delhi, and many others. It came up as a significant political party when in the 2011 legislative assembly election it won 18 seats and became the main opposition party in the state.

The AIUDF, formerly known as the UDF, contested 14 Lok Sabha seats from West Bengal in 2009. The President of the party is Maulana Badruddin Ajmal, who stresses on good governance, and swears to unveil the 'real picture' of Assam government's development. The party wants to showcase how funds from different government schemes and projects are being misused.

Currently, the AIUDF is reorganising the party right from the grassroots. Dr. Baharul Islam, General Secretary (Organisation) of the party, has been entrusted with the responsibility of preparing the next-generation leadership, especially from the youths of Assam.

Bodoland People's Front : It is a state-level political party and is considerably strong in and around Kokrajhar and Autonomous District. During the 2009 general election. Sansuma Khunggur Bwiswmuthiary became its first MP, elected from Kokrajhar. In 2008, Biswajit Daimary was the first person to be elected from the Rajya Sabha. In the 12th Assam Legislative Assembly, the Bodoland People's Front won 10 assembly seats. Currently, it is a constituent of the ruling coalition government of Assam. It won 12 seats in 2011 Assam Assembly election.

The main political parties in Assam
Indian National Congress always has a monopoly in the state since independence. Howvere, the year 1978 saw exception when the Janta Party emerged as a winner in the general Assembly elections but enjoyed power only for two years as they got defeated again by INC. Between 1985 and 2006, Indian National Congress and the Assom Gana Parishad took to political power alternatively. However, INC is in power since 2006.

Asom Gana Parishad: The Asom Gana Parishad is all set to contest the election all alone. They don't want to ally themselves with BJP anymore because in the party many believe that during the 2009 Lok Sabha election the AGP's votes were transferred to the BJP but not the other way round. Interestingly, the AGP has formed a united political front in the northeastern states, which they call North East Political Front (NEPF), for contesting the 2014 General election. N. Rio, Chief Minister of Nagaland, is the chief convener of this front.

AIUDF The All India United Democratic Front's main poll plank will be to target the ruling Congress's anti-people stands. One of the main strategies of the AIUDF is to highlight the government's failure to check price rise of essential commodities in Assam. The party has also written to the Prime Minister about this. They have highlighted that illegal tax-collection at various check gates and black marketing as the main reasons of soaring prices of essential commodities. The party is also highlighting escalating tensions between different communities in Assam during the INC rule. Law and order in the state is in shambles and the cases of murders, extortions, and kidnappings are rising regularly. The AIUDF is also highlighting the issue as one of their main Lok Sabha 2014 poll strategies.

Location and Strategic Importance
Assam has strategic significance when it comes to its location. It is one of the seven states of Northeast India. This state is connected to mainland India through the Siliguri Corridor, a narrow strip of land in West Bengal. Assam shares international borders with foreign countries such as Bangladesh and Bhutan.

BJP was hoping for a victory in the state of Assam and got 50 % of the seats from the total seats i.e., seven seats from the 14 seats. INC won three seats and All India United Democratic Front (AIUDF) won three seats. The state of Assam is also an important state in terms of Indian politics. It gives a share of 14 Lok Sabha seats in the Indian Parliament. The national parties in the Assam includes Indian National Congress (INC), Bharatiya Janata Party (BJP), Communist Party of India (CPI). The Congress has a stronghold in Assam with majority victories in the state in the last Lok Sabha elections. In the 2009 elections, seven seats were won by Congress, 4 by BJP and the remaining seats by other regional parties. The 2014 Lok Sabha elections were held in three phases in the state of Assam.

Ayodhya All Set For Groundbreaking Event


The groundbreaking Ramjanma Bhoomi Pujan ceremony has commenced in Ayodhya. Prime Minister Narendra Modi is going to lay the first brick of the grand Ram Temple of Ayodhya. With the Read More…

Rajasthan Updates: Gehlot Accuses the Governor of Acting Under Pressure


Rajasthan High Court has ordered the speaker to maintain the status quo on the disqualification notices sent to Sachin Pilot and rebel camp. The High Court has put off its Read More…


After calling Sachin Pilot ‘Nikamma’, Rajasthan CM Ashok Gehlot has now moved his gun towards Governor. In his last press conference, he has accused Governor Kalraj Mishra of delaying the Read More…