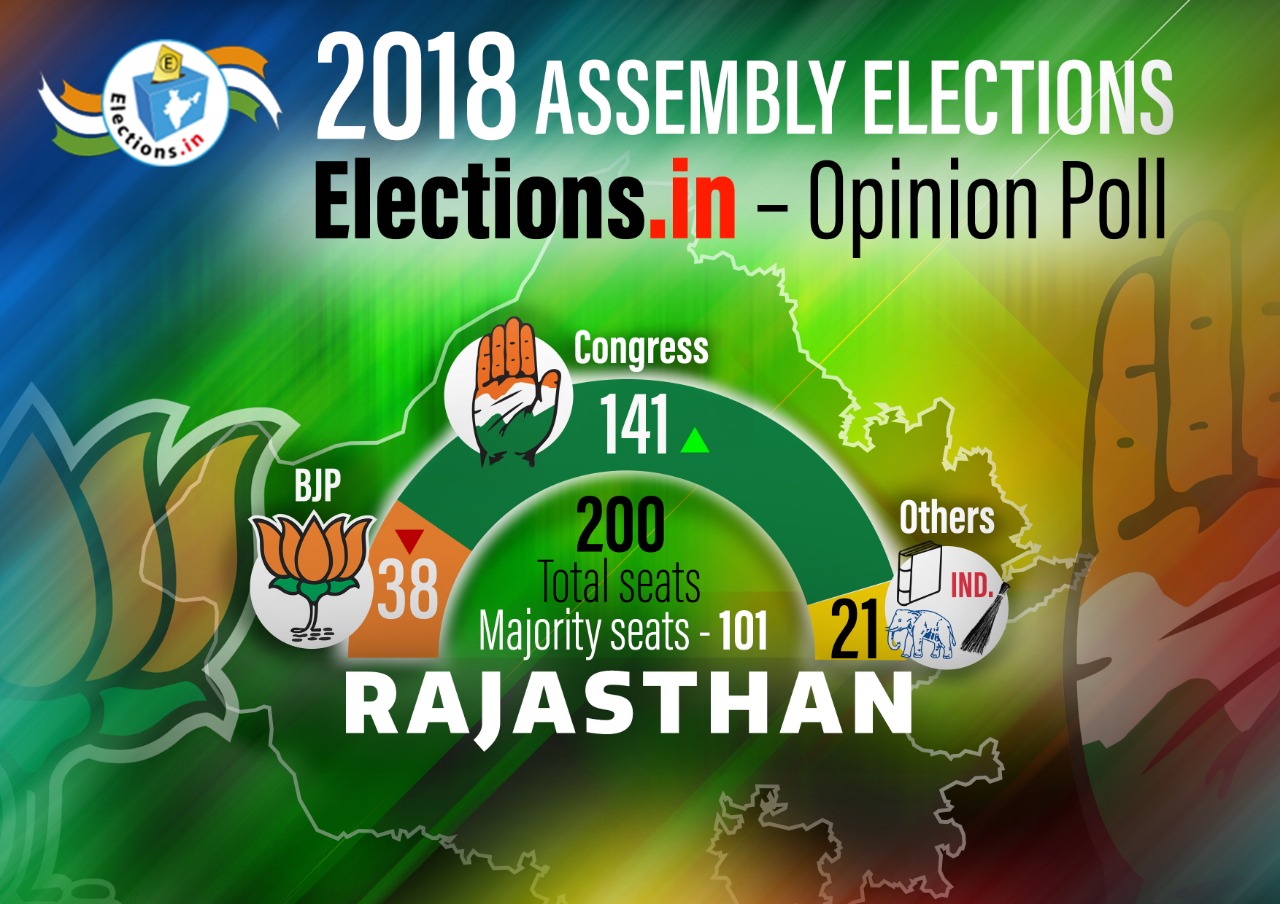 The wave is against BJP in Rajasthan this time. It would not easy for BJP to return into power this term in Rajasthan as predicted by opinion poll 2018 conducted by elections.in. An opinion poll 2018 suggests that the out of 200 seats Congress may get massive 141 seats victory as compared to BJP with 38 seats while others are expected to settle on 21 seats.
Well as it quite soothing for Congress whereas it is a ringing bell for BJP. Besides NaMo wave and support, the reason BJP is losing Rajasthan is simply one: Vasundhara Raje. The chief minister is known for her imperiousness, and for being extortionist. People have opinion that Vasundhara Raje does not give value to the public and their grievances. She even does not bother to give time to MPs and MLAs. This is one major reason that her government fails to meet public expectations. With respect to employment, law and order, delaying in government projects like metro project etc, BJP government failed everywhere. The record of Vasundhara Raje’s poor governance combined with naked corruption and unparalleled arrogance in the modern era means that there is no way even Modi can overcome the deep hatred that has built up against her. Never in the history of BJP has every single core voter group turned against it, as it has this time. Almost every feedback pointed to this result, but Modi and Shah in their wisdom chose to ignore this. But her ignorance can cause a massive blow for the BJP in this assembly election 2018. Maybe they could not muster the courage to take on the haughty Maharani. So they will pay for their insolence.
Though she have support of female population as she implemented several women related schemes, this time it would be really hard for Vasundhara to came back in power. Ban on alcohol is supported by female population while government is not in this favour.
If we look at the opinion polls 2018, elections.in predicts that out of 200 seats, Congress may capture 141 seats, BJP may get 38 and others may get 21. While according NDTV poll 2018 Congress may capture 129 seats, BJP may get 63 seats and others 08 seats. ABP predicts that Congress may get 142, BJP 56 seats and others 02 seats. According to News Nation opinion poll 2018, Congress may win with 115 seats, BJP may get 73 seats and others may take away 12 seats.