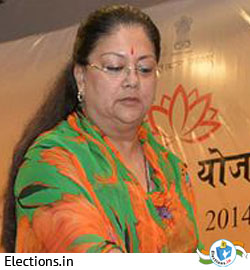 Smt. Vasundhara Raje was born on March 8, 1953 in Mumbai. She is the daughter of the last reigning maharaja of Gwalior of pre-Independence, Jivaji Rao Scindia, and Rajmata Vijayaraje Scindia, who was a political leader in the post-Independence India.

Vasundhara Raje finished her schooling at the Presentation Convent, Kodaikanal, Tamil Nadu. She graduated with honors in political science and economics from Sophia College, University of Mumbai. She got married into the Royal Family of Dholpur, in the eastern Rajasthan.

Vasundhara Raje married Maharaj Rana Hemant Singh, of the royal JatDholpur family, on 17 November 1972, but the couple separated a year later. Her son Dushyant Singh was elected to the Lok Sabha from her former constituency, Jhalawar.Her siblings are YashodharaRajeScindia, Industries Minister of Madhya Pradesh, the late MadhavraoScindia, the late Padmavati Raje 'Akkasaheb' Burman (1942–64), who wed Kirit Deb Burman, last ruling Maharaja of Tripura, and Usha Raje Rana (b. 1943) who married into the Rana family of Nepal.

In 2007, she received the "Women Together Award" by the UNO for services rendered towards self-empowerment of women.