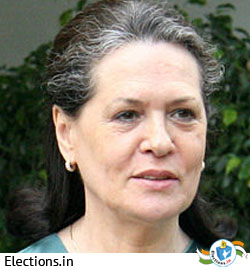 Sonia Gandhi is an Italian-born Indian politician and former President of the Indian National Congress party. She belongs to the third generation of the Nehru-Gandhi family. She was born as Edvige Antonia Albina Maino in Italy on 9 December, 1946. Sonia Gandhi is the widow of former Prime Minister of India Rajiv Gandhi. She joined politics in 1997 amidst constant requests from Congress party members after the demise of her husband Rajiv Gandhi, who was assassinated in 1991.

Sonia's foreign origin has been a subject of controversy and debate in Indian politics. She is the first foreign-born to lead the national party since Independence. Sonia Gandhi formerly held the position of President of the Indian National Congress Party, which is one of the oldest and most powerful parties in Indian politics. She served as the Chairperson of the United Progressive Alliance, which was in power at the Centre for two consecutive terms. Sonia Gandhi is the longest serving president of the Congress party.

Sonia Gandhi was born on 9 December 1946 in Contrada Miani at Lusiana. It is a small village about 30 km from Vicenza, Veneto in Italy, where the Mianos lived for generations. She belonged to a Roman Catholic family and spent her adolescence in a town called Orbassano near Turin. Her parents were Stefano Miano and Paola Miano. Her father had a small construction business and was himself a building mason. She studied in a Catholic school in Orbassano and then went to the city of Cambridge in 1964 to study English in a school under the Bell Education Trust. She worked at the Varsity Restaurant and met Rajiv Gandhi in 1965 there. Rajiv Gandhi was studying in Trinity College at the Cambridge University then.

In 1968, they got married in a Hindu ceremony, after which she shifted to the house of her mother-in-law, the then Prime Minister of India, Mrs. Indira Gandhi. The couple had two children, Priyanka and Rahul Gandhi. While Rajiv Gandhi was a professional airline pilot before joining politics in 1982, Sonia Gandhi remained a housewife and kept away from public eye and politics until she was convinced to join Indian politics in 1997 by the Congress party.

How did Sonia Gandhienter politics

Sonia Gandhiplayed the perfect official hostess as his wife and also travelled with him on several state visits. Unfortunately Rajiv Gandhi was assassinated in 1991. Soon after this, the party invited Sonia Gandhito join as a member and take up the post of Prime Minister, which she refused. After her disinclination the party chose P. V. Narasimha Rao as their leader and as the Prime Minister of India. The Congress party lost the elections in 1996 and continued to dwindle, when senior leaders, including P. Chidambaram, Madhavrao Scindhia, Arjun Singh, Rajesh Pilot and Mamata Banerjee showed their resentment for the then incumbent President of the party- Sri Sitaram Kesari. Congress saw several splits during this period.

Initially, Sonia Gandhi led a quiet life as a housewife, away from public eye and politics. She got connected with Indian public life during her husband’s election as Prime Minister. This was in the aftermath of the assassination of the then Prime Minister, and Sonia's mother-in-law, Indira Gandhi. In 1984, Sonia Gandhi campaigned actively for the first time against Maneka Gandhi, her sister-in-law (wife of Sanjay Gandhi, the younger brother of Rajiv Gandhi). Maneka was contesting against Rajiv Gandhi in Amethi. Rajiv Gandhi won the election and became the Prime Minister of India.

Sonia Gandhi played the perfect official hostess as his wife and also travelled with him on several state visits. After the assassination of Rajiv Gandhi in 1991, Sonia Gandhi was invited to join the party and take up the post of Prime Minister, which she refused. After her disinclination, the party chose P. V. Narasimha Rao as their leader and as the Prime Minister of India.

The Congress party lost the elections in 1996 and continued to dwindle, when senior leaders, including P. Chidambaram, Madhavrao Scindia, Arjun Singh, Rajesh Pilot and Mamata Banerjee showed their resentment against the then incumbent president of the party, Sitaram Kesari. The party underwent several splits during this period.

In 1997, Sonia Gandhi joined Congress in the Calcutta Plenary Session as a primary member to revive the position of the party. Soon after this, in 1998, she became the party leader.

Manmohan Singh was re-appointed as the Prime Minister for a second term.

'Sonia Gandhi: An Extraordinary LifeAn Indian Destiny', a Biography written by Rani Singh brings forth the struggles and events in the life of Sonia Gandhi and her family. Gandhi's story typifies one of the greatest transformational journeys made by any Indian political leader. Singh shows how situations and tragedy and not ambition guided her path to power. The book begins with the love between Sonia and Rajiv Gandhi, and then goes on to describe her entry into Indian politics.

'Sonia Gandhi: Tryst with India' by Nurul Islam Sarkar is a tribute to Sonia Gandhi's amiability, courage and unselfish service. Gandhi considered to be an icon of Indian politics, is an inspiration for many. The book talks about her leadership qualities and achievements by virtue of which she leads the Congress party. It not only talks about her political life but also her personal life and reveals some unknown truths.

Rasheed Kidwai's 'Sonia: A Biography' tells the exceptional story of one of India's most enigmatic women. He describes her journey from the small Italian town to 10 Janpath, New Delhi. It gives a vivid picture of the growth of Sonia Gandhi against the backdrop of the Congress party's return to power. The book reveals the transformation of Gandhi from an uncertain party president to the head of the UPA government after the victory in 2004 general election.

'Indira Gandhi: Selected Sayings' contains various quotations taken from her speeches. These quotations reveal her vision, her wide range of interests, and her perceptive mind. In other words, it reflects her warmth for the people of the country and her commitment to the unity of India. Her life was entangled with the history and destiny of modern India. The book strives to show other facets of her personality apart from politics.

'Two Alone, Two Together', authored by Sonia Gandhi, contains selected letters that were a part of conversation between Jawaharlal Nehru and his daughter Indira Gandhi. The letters give new insights into the nature and personality of two of the most eminent personalities of India. It maps Indira Gandhi's transformation from a shy schoolgirl into a magnetic political leader. The letters show the love of nature and books that the two shared and brings forth their frank views on various subjects, ranging from family to politics.