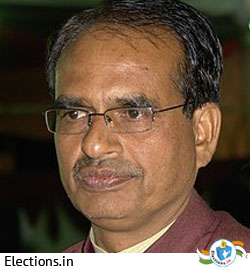 
Shivraj Singh Chouhan is an Indian politician belonging to the Bharatiya Janata Party. He is currently the Chief Minister of Madhya Pradesh. Famous as 'bhai, beta and mama' among the people of Madhya Pradesh, Shivraj has won recognition as a strong leader by the opposition party because of his dedicated service. At present, he represents Budhni constituency, a tehsil place in Sehore district, in the Madhya Pradesh assembly.

Shivraj Singh Chouhan was born on March 5, 1959 at Jait village, Sehore in Madhya Pradesh. Chouhan is the son of Prem Singh Chouhan and Sundar Bai Chouhan. He completed his Masters in Philosophy from Barkatullah University, Bhopal. Chouhan married Sadhana Singh in 1992. The couple have two sons. Chauhan was an agriculturist before entering politics.