In Jharkhand Assembly Exit Poll 2019 IANS-CVOTER-ABP exit poll has predicted 35 seats for Congress-JMM-RJD alliance, whereas BJP gets 32 seats. The AJSU is predicted to win 5 seats and the remaining 9 seats might be won by independent candidates.

INDIA TODAY-AXIS MY INDIA has given a clear victory to INC+ gaining 38-50 seats whereas BJP is reduced to 22-32 seats. Also, AJSU predicted to win 3-5 seats and 6-11 independent winners.

The third exit poll, conducted by KASHISH NEWS also has a winning prediction for the INC+ coalition. According to this poll, INC+ gets 37-49 seats; BJP: 25-30 seats; AJSU: 2-4 seats; and 2-4 constituencies to be won by independent candidates.

Popular psephologist and political analyzer Mr. Chintamani along with 5Dots carried out an intensive opinion poll for our portal. The poll suggests that the Bhartiya Janta Party is set to lose nothing whereas the Congress would gain marginally. In 2014, the BJP became the first party to get a clear majority on its own after a period of 30 years. The BJP got 282 seats in the previous elections. According to the survey, the BJP is set to gain 271 seats just one short of the clear majority. The NDA is expected to get 335 seats whereas UPA will not be able to cross the 100-mark again.

WHY MP, CHHATTISGARH AND RAJASTHAN WILL VOTE DIFFERENTLY - Chintamani Shastri 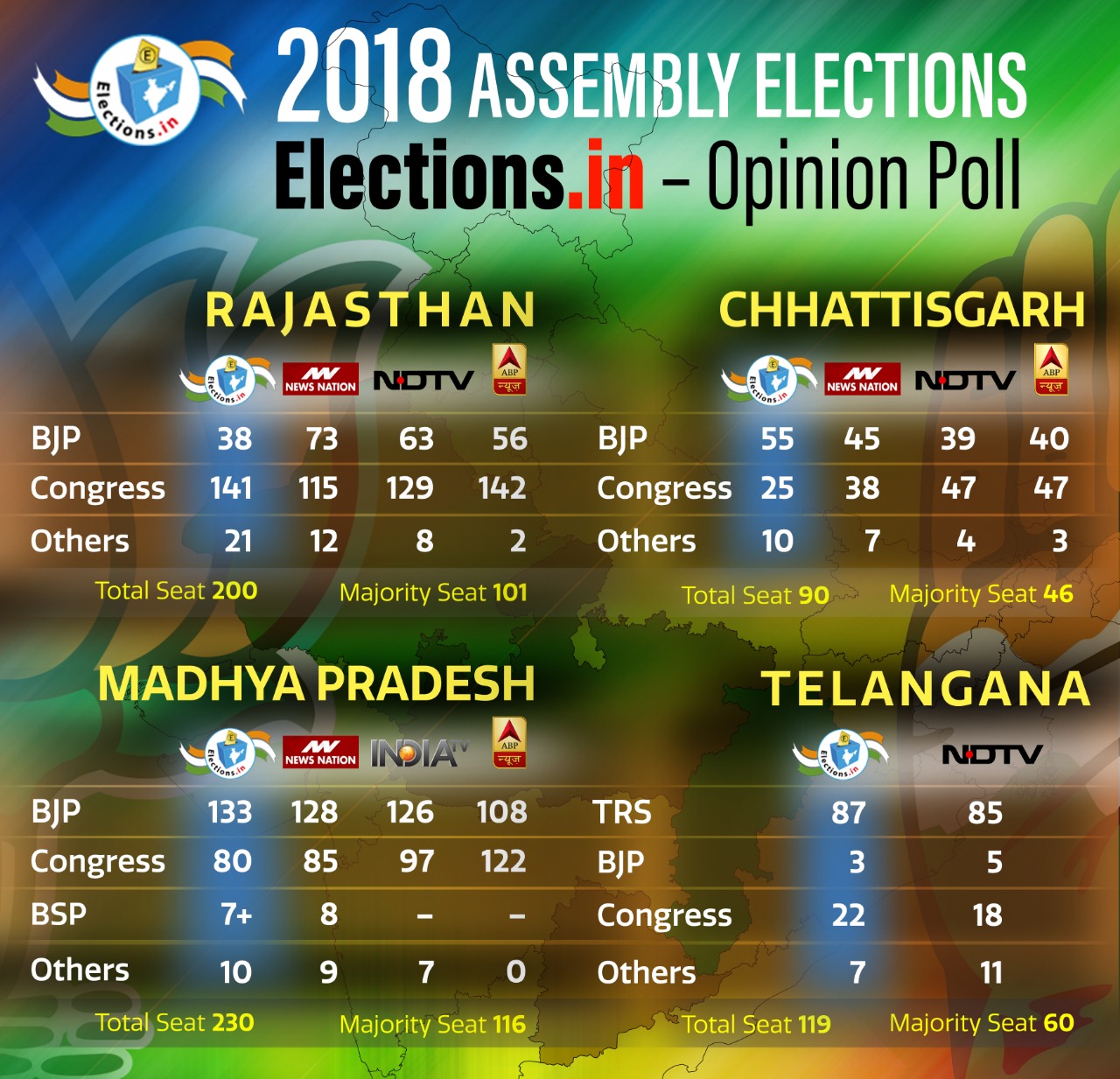 The die is cast. The last round of State elections before the 2019 General Elections have been announced. We will know how the cookie crumbles on 11th December.

We at elections.in have done our calculations. The results are as follows:

The reason BJP is losing Rajasthan is simply one: Vasundhara Raje. Her record of poor governance combined with naked corruption and unparalleled arrogance in the modern era means that there is no way even Modi can overcome the deep hatred that has built up against her. Never in the history of BJP has every single core voter group turned against it, as it has this time. Almost every feedback pointed to this result, but Modi and Shah in their wisdom chose to ignore this. Maybe they could not muster the courage to take on the haughty Maharani. So, they will pay for their insolence.

One might also say that they can see it coming but can't control as it was the case in Punjab. So, the best option is to ignore and play blame games after elections. Check Rajasthan Opinion/Exit Poll 2018

MP will return BJP for the very reason it is getting rejected in Rajasthan. Shivaraj Chauhan's rootedness, and accessibility has blunted a 15-year anti-incumbency. Congres's inability to bring a genuine challenger to the fore is another reason. The Big Three are still devising a way to checkmate each other.

BSP will hurt Congress in Chambal and Bundelkhand. In spite of relative inefficiency of the Government and some disappointment in the BJP's core group at BJP's neglect of the Core Hindu Issues, Shivraj Singh Chauhan's public connect will win the day for BJP in Madhya Pradesh. Check Madhya Pradesh Opinion/Exit Poll 2018

Chhattisgarh has been a traditionally close race between BJP and Congress. However, the BSP-Jogi alliance is going to hurt Congress big time. For the first time in 15 years, the voting percentage gap between the two is likely to increase to 5% because of the Jog-BSP combine. Raman Singh continues to be popular, in spite of the 15-year anti-incumbency. Like Shivraj Singh Chauhan, Raman Singh is also adept at anger management. This makes it possible for him to tackle anti-incumbency. Congress lacks local leadership, which also makes it difficult for it to mount an effective challenge. Check Chhattisgarh Opinion/Exit Poll 2018


Bihar Election 2020 is expected to take place around October-November this year. Before that, many political activities are taking place in Bihar. The recent one is the tussle between the Read More…

Yogi Is the Only Powerful BJP Chief Minister


Coronavirus pandemic is spreading in India at a faster pace. Initially, the center had taken things into hands. The Modi Government was at the forefront of the fight against the Read More…


Every newspaper and news website of India is now having a headline concerning India China border clash. The government is trying its level best to resolve the crisis as soon Read More…