Elections to Tamil Nadu Legislative Assembly's Thanjavur and Aravakurichi seats took place on 19 November, 2016 amid tight security. Polling in these two seats had been rescinded by the Election Commission of India earlier this year in the 16 May assembly elections following reports of large scale money laundering by candidates and political parties. A byelection was also held in Thiruparankundram assembly seat on 19 November, 2016. The seat had fallen vacant following the demise of sitting MLA and All India Anna Dravida Munnetra Kazhagam (AIADMK) member SM Seenivel. Seenivel had won from Tiruparankundram assembly constituency. He passed away even before taking his oath as a member of the legislative assembly (MLA). The voter turnout was 82.13% in Aravakurichi, 69.07% in Thanjavur and 70.40% in Thiruparankundram. As many as 81 candidates contested from the three assembly constituencies. Although several political parties were in the fray, the contest is chiefly between the AIADMK and DMK in Tamil Nadu.

Elections to the local bodies in Tamil Nadu are conducted by the Tamil Nadu State Election Commission every five years to elect representatives to its Rural and Urban local bodies. The state election commission had announced that the 2016 local body elections would be conducted in two phases on 17 and 19 October. The nominations for the Tamil Nadu civic body elections were to be collected from September 26, the last day to submit the documents was October 3 and the last date to withdraw nominations was October 6. However, a single-judge bench of the Madras High Court had declared the notification for elections null and void on grounds of violation of Tamil Nadu Panchayat Election Rules. It also directed election authorities to issue a fresh notification for the same and complete the process by December 31. The state election commission has filed an appeal against the verdict and the same has been admitted by the High Court. The election body has argued that the verdict has caused a grave miscarriage of justice and that it is not desirable to delay the elections.

The 2016 Assembly Election was held in Tamil Nadu in single phase on 16 May. The result was declared on 19 May. Jayaram Jayalalitha created history by being the first incumbent chief minister since 1989 to return to power in the state. She now holds the record for being the chief minister of the state for six times. Jayalalitha's AIADMK (All India Anna Dravida Munnetra Kazhagam) won 134 seats and main opposition party DMK (Dravida Munnetra Kazhagam) bagged 89 seats. The Tamil Nadu legislative assembly has a sum total of 234 seats. Jayalalitha, who is popularly addressed as 'Amma', proved all exit polls wrong which said that she would lose to the DMK-Congress alliance. Perhaps, DMK's inability to capitalise on anti-incumbency and Jayalalitha's attractive welfare measures made it possible for her party to return to power.

AIADMK general secretary J. Jayalalithaa was sworn in as the Chief Minister of Tamil Nadu by Governor K. Rosaiah at Madras University’s Centenary Hall on 23 May. Her 28 Cabinet colleagues were also sworn in. According to the new list of Tamil Nadu cabinet members, 13 new faces were inducted.
Let's have a look at the portfolios that will be handled by the ministers.

With Tamil Nadu going to elections in the summer of 2016, all major political contenders I the fray have begun preparations. DMK, the main opposition party, has announced that it will fight the elections together with the Congress. After splitting over the Sri Lankan Tamils issue a couple of years back, the two have come together once again for the upcoming elections. Ruling party AIADMK has allied with smaller regional parties and given up seven of the 234 seats for them to contest. Vijaykanth's DMDK has forged alliance with the People's Welfare Front (PWF).

The state was renamed Tamil Nadu in August 1968 and the strength of its Legislative Assembly became 234.

The Indian National Congress (INC) was the prominent party in the early years of independence. Justice Party headed by Periyar E V Ramasamy was one of the earliest regional parties in the state. Dravida Munnetra Kazhagam (DMK), founded in 1949 by C N Annadurai , himself a former Justice Party member, came to power for the first time in 1967. The other main political party of the state, the AIADMK, was founded in 1972 by Dr M G Ramachandran, on leaving the DMK. The All India Anna Dravida Munnetra Kazhagam (AIDMK) led by M G Ramachandran formed the first state government in 1977. M G R remained in power as the CM for ten years till his death in 1987. DMK, currently headed by M Karunanidhi came to power in 1989. Since then each party has formed the government alternately. Currently Jayaram Jayalalitha of the AIADMK is the Chief Minister. M Karrunanidhi of the DMK has been the Chief Minister of the state five times.

In General Election to the Lok Sabha in 2009 DMK in alliance with INC and VKC won 27 out of 39 seats. DMK is part of the United Progressive Alliance with INC. AIADMK contested the 2009 elections as part of a Third Front with CPI and CPI (M).

Some of the prominent politicians of the state have been Shri G K Moopanar, former AICC General Secretary, Shri K Kamaraj and J Jayalalithaa former Chief Minister of the state.

The last state assembly elections were held in 2011. The number of elector who voted was 36756813. The number was 78 % of the total number of electors. The AIADMK won 150 seats. Its alliance partners DDMK won 29 seats and the CPI won 10 seats. The DMK, the incumbent government, won 23. The INC won 5 seats. The AIADMK formed the government and the current Chief Minister is Jayaram Jayalalitha of the AIADMK. The Speaker of the Tamil Nadu Legislative assembly is Shri D Jayakumar and the Deputy speaker is Shri P Dhanapal. The Leader of the House is O Panneerselvam and the Leader of the Opposition is Shri Vijaykant.

Regular elections are held for the state assembly and Lok Sabha seats. Apart from these, the state conducts elections for the local bodies including 10 urban municipal corporations, municipalities and town Panchayats. 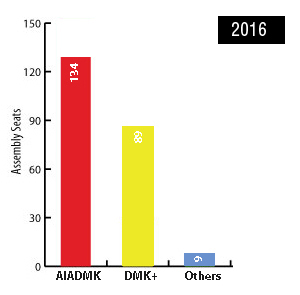 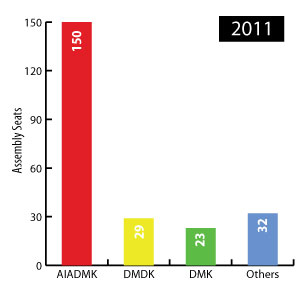 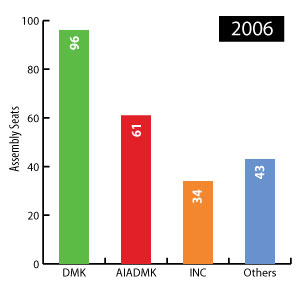 All India Anna Dravida Munnetra Kazhagam (AIADMK) mark another victorious win in the state by winning 37 seats out of 39 seats in the 2014 Lok Sabha polls. One of the largest state in India, Tamil Nadu is a political hub for many political parties in the country. Besides the major political parties like Indian National Congress (INC), Bharatiya Janata Party (BJP), the state is majorly run by many regional parties like All India Anna Dravida Munnetra Kazhagam (AIADMK), Desia Murpokku Dravida Kazhagam (DMDK) and Dravida Munnetra Kazhagam (DMK). Presently, the state is governed by the AIADMK and headed by the Chief Minister Jayaram Jayalalitha. The 2009 Lok Sabha was won by DMK with an alliance with INC. Tamil Nadu has 39 parliamentary constituencies, out of which seven are reserved for the Scheduled Castes. Elections for the 39 constituencies in 2014 were held on a single day. All the major political parties were hitting at Tamil Nadu as an important state, as the 39 seats could have changed the political scene in the state. The predictions in the exit and the opinion polls by various sources stated that AIADMK would grab maximum number of seats followed by DMK and Congress.

Tamil Nadu in south India is one of the larger states of the country. The state is the seventh most populous, though it is the eleventh in size. The state was known as Madras at Independence. Elections have been held in the state since the constitution of its first legislative assembly with 206 members in 1952.