The result date yet not declared.

The Kerala Assembly elections were held in single phase on 16 May and results were declared on 19 May 2016. The CPI(M)-led Left Democratic Front emerged victorious with 91 seats. Congress-led United Democratic Front (UDF) was the runner-up with 47 seats. The Kerala state Assembly comprises 140 constituencies. The centrist UDF and leftist LDF are the two main coalitions in the state with power alternating between the two at regular intervals. The UDF won by a narrow margin of four seats in 2011. The LDF clinched power this time with a resounding majority. CPI(M) polit bureau member Pinarayi Vijayan, who represents Dharmadam constituency, is the chief minister elect.

The leftist LDF and the centrist UDF happen to be the two major alliances which have formed government in Kerala from time to time. Besides these two traditional rivals, the BJP has emerged as the third major challenger in the state. Its alliance with the Sree Narayana Dharma Paripalana (SNDP) and Bharath Dharma Jana Sena (BDJS) is expected to help the BJP get support from Ezhavas as well as other backward communities.

The state of Kerala has a unicameral legislature with Legislative Assembly (Vidhan Sabha). Like all other states the state has a parliamentary system of governance. The executive authority lies with the council of ministers headed by the Chief Minister. The Governor who is the titular head of the state is elected by the President of India. The High Court in Ernakulam (near Kochi) is headed by a Chief Justice. Below the High Court are district courts, subdivisional courts, munsifs' (subordinate judicial officers') courts, and munsif-magistrate courts. The state is divided into districts, which are further divided into talukas (subdivisions) and villages.

Issues of the state

The plight of the tribals in Kerala is not known to many. Most of the tribes are far from development and education. The Cholanaikkan, Ernadan, Alar, Adiyar and Paniyar are some of the poorest tribes. Poverty and illiteracy are the factors that keep them poor and unwanted. Tribal children should be encouraged for education. They need proper infrastructural facilities. Many people die because of malnutrition, ignorance and superstitious beliefs. There is a need to provide better health facilities.

The historical legacy of caste and ethnic discrimination is visible in many spheres of Kerala's development process.

The Kerala Legislative Assembly is also called the Niyamasabha, which constitutes 140 elected members and one nominated member from the Anglo Indian community. The state of Kerala came into existence in 1956 by the merging of Malabar region,Cochin, and Travancore on the basis of linguistic preferences. On 5 April 1957 the first legislative assembly was formed in Kerala. Initially, the total number of assembly seats was 127, which was later increased to 140 after the formation of Kasargod and Malappuram districts. The current Chief Minister is Oommen Chandy of the UDF and the leader of opposition is V.S. Achuthanandan from the LDF. Check the members of Legislative Assembly (MLAs) of Kerala... 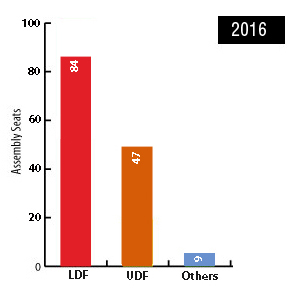 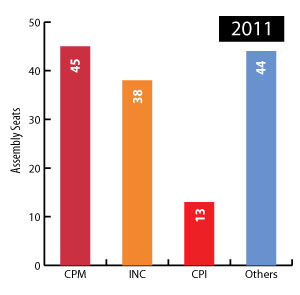 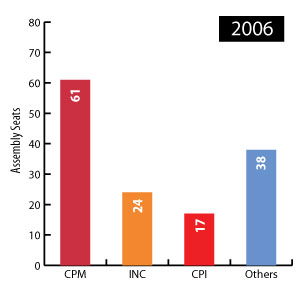 The first CM of Kerala was E.M.S. Namboodiripad, who assumed office on 5 April 1957. The incumbent Chief Minister is Pinarayi Vijayan, who took the oath on 25 May 2016. The entire list of CMs of the state, right from its formation, is:

Burgula Ramakrishna Rao was the first Governor of Kerala, and assumed office on 22 November 1956. There have been 22 Governors till date, the one being Sheila Dixit, who assumed office on 5 March 2014. The complete list of Governors in the state is given below:

The state of Kerala has 20 seats in the Lok Sabha, out of which eight seats are won by the INC followed by Communist Party of India (Marxist) who bagged five seats. Established in 1956, Kerala has approximately 2,37,92,270 voters. The government of the state is headquartered in Thiruvananthapuram and is headed by the present Chief Minister Oommen Chandy under the Indian National Congress' (INC) alliance. The Left Democratic Front (LDF) and the United Democratic Front (UDF) are the major political fronts in the state and Communist Party of India (Marxist) (CPI(M)), INC, Indian Union Muslim League are other important political parties in the state. INC won the maximum Lok Sabha seats in the last elections in the year 2009. The LDF and INC had the chance to win maximum seats according to the surveys and the exit polls which were held in relation to the Lok Sabha polls.

Kerala, a state in south west region of India, along th Malabar coast. The state was established in November 1956, by combining the Malyali speaking regions.