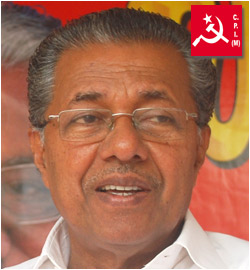 Pinarayi Vijayan is the current Chief Minister of Kerala. He is a politbureau member of the Communist Party of India (Marxist). He served as the secretary of Kerala State Committee of CPI(M) from 1998 to 2015. He served as Minister of Electricity and Co-operatives in the Kerala government from 1996 to 1998. In the 2016 Kerala Assembly elections, Vijayan won from Dharmadom constituency with a margin of 36,905 votes. He was sworn-in as the 12th Chief Minister of Kerala on 25 May, 2016.

Pinarayi Vijayan was born on 24 May, 1945. As per official records, his birthday is on March 21, 1944. He hails from a poor toddy tapper’s family in Pinarayi in Kannur district. He is the youngest son of his parents Kalyani and Mundayil Koran. After completing his school education, Vijayan worked as a handloom weaver for a year. He joined Government Brennen College, Thalassery for a pre-university course and completed his degree course from the same college. His wife is Kamala Vijayan and they have one daughter and one son.

Pinarayi Vijayan made his foray into politics during his student days at Government Brennen College. He participated in student union activities and joined the Communist Party in 1964. He then became Kannur district secretary of Kerala Students' Federation (KSF), which eventually became the Students Federation of India (SFI). He eventually earned the position of state secretary and state president of the party. He moved to Kerala State Youth Federation (KSYF), which later became the Democratic Youth Federation of India (DYFI). He was chosen as the president of the state committee. During that time, Vijayan was imprisoned for one and a half years for his political activities. He has also been the president of the Kerala state co-operative bank.

Vijayan was arrested and tortured during the years of emergency. He became Kannur district secretary of CPI(M) after M.V. Raghavan left the party. Vijayan became member of the State secretariat within three years. He was the Minister for Electricity and Co-operatives from 1996 to 1998 during E.K. Nayanar's tenure as chief minister of Kerala. In 1998, he was elevated to the post of CPI(M) state secretary on the death of incumbent Chadayan Govindan. He got elected to the CPI(M) politburo in 2002. Pinarayi Vijayan became the 12th Chief Minister of Kerala on 26 May, 2016.