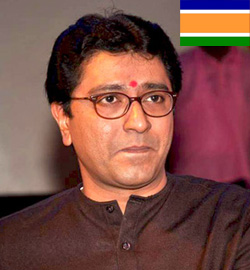 According to a recent report published by Google, during the 2014 Assembly elections in Maharashtra, the most popular politician online in Maharashtra was Raj Thackeray, the Chief of Maharashtra Navnirman Sena (MNS). In fact, after the humiliating performance of MNS during the 2014 Lok Sabha election, the assembly election in Maharashtra is a watershed moment in the political life of this firebrand leader. He recently said that non-Marathis should not be allowed to work in Maharashtra. And even after getting the notice pertaining to breach of Model Code of Conduct from the Election Commission, he refused to apologise. His fierce politics of provocation and excluvism has helped him carve out his own place in Maharashtra politics, where many call him the leader of the Marathi manoos (people).

He was born on July 14, 1968 to Shrikant Thackeray and Kunda Thackeray. His father was the younger brother of Shiv Sena founder Bal Thackeray. Raj is married to Sharmila Thackeray, daughter of a well known theatre personality of Maharashtra. The couple is blessed with son Amit and daughter Urvashi.

Raj Thackeray attended Bal Mohan Vidya Mandir, which was located in Dadar and then went on to study painting at the prestigious JJ School of Art. While growing up, he also learnt violin, guitar, and tabla. He always loved to draw cartoons and caricatures and his other passion was photography. In his younger days he used to contribute to Balasaheb’s the then weekly magazine ‘Marmik’.

During his childhood, he was always seen beside Balasaheb and the political atmosphere around him drew him towards politics. As he grew up he started participating and organising Shiv Sena events. His proximity and similar qualities as Balasaheb (like provocative speeches) made many think Raj as the true heir of Bal Thackeray’s legacy. However, destiny had something else in store for him.

After Bal Thackeray handed over Shiv Sena's baton to his own son Uddhav, Raj Thackeray decided to leave SS and form his own political outfit. He formally announced his own party Maharashtra Navnirman Sena in November 2006.

MNS became the headlines of every newspaper of Maharashtra in 2008 when he launched a violent agitation and promised to throw the North Indians outside Maharashtra, reminding Maharashtrians of the violent past of Shiv Sena.

His next successful move in establishing himself and his party as a force in Maharashtra was the agitation against English signboards and demand to keep only those signboards that are written in Marathi language. This led to the arrest of some agitating MNS workers, leading to a political ruckus in Maharashtra. However, it gave MNS the well desired political base.

The next big step taken by Raj’s MNS was forceful reinstatement of Jet Airways’ sacked temporary employees in a day’s notice. He threatened the management with non-operation of all the flights from Mumbai if the employees were not reinstated.

MNS first contested Assembly election in 2009 and won 13 seats. Raj Thackeray’s resorted to street violence and identity politics just before 2012 municipal elections of Maharashtra. The MNS activists were also successful in making the striking (on the demand of higher fares) auto drivers, among whom many were North Indians, withdraw their strike with use of violence, intimidation, and putting forward the interests of Marathi people. This helped the party win 28 seats in Mumbai municipality and 40 seats in Nashik, which made MNS the single largest party in Nashik municipality. In many other municipalities across the state. Raj’s party opened its account.

However, his political prospects got severely beaten when all the ten MNS candidates suffered humiliating defeats, losing their respective deposits, during the 2014 Parliamentary election. The vote share dipped from 4.7 per cent in 2009 to 0.13 per cent. Assembly elections in Maharashtra marks Raj Thackeray’s quest for political survival and only time will say what is in store for him.