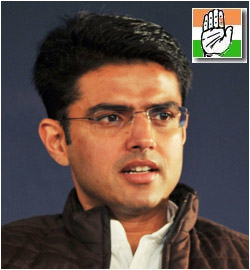 Sachin Pilot Wins Tonk Constituency of Rajasthan, he is probable candidate for Cheif Ministership of the State if Congress. He secured 109040 Votes and Defeated Yunus Khan 54179 Votes who secured 54861 Votes, For more details, click here

Sachin Pilot represented the Ajmer constituency as an MP in the 15th Lok Sabha from the Congress. He was also the Minister of Corporate Affairs, and was appointed as the President of Rajasthan Pradesh Congress Committee (RPCC). Pilot was the youngest Member of Parliament in the country.

Sachin Pilot was born on September 7, 1977 in Saharanpur, Uttar Pradesh. His father, Rajesh Pilot, a Congress (I) leader, was a Union minister of India. His mother is Rama Pilot. He got married to Saraa Abdullah, the daughter of Farooq Abdullah, in 2004. He has two sons, Aaran and Vehan.

Sachin Pilot is a graduate in B.A. from the St. Stephen’s College, Delhi. He holds double MBA degree, one from the Institute of Management Technology, Ghaziabad, and the other from the University of Pennsylvania, USA.