Track your constituency
Live News
Live News
PM, CM don’t work Without Seeking Nod of Gaming Industrialist Friends: Rahul in Chhattisgarh Deduction for Mortgage Interest. Taxpayers can express write-offs for real estate loan interest (HLI) under salaries tax and private evaluation. Get The Cash You Want for Unforeseen Expenditures The site’s character examination is helpful with regards to discovering the right match for you personally a people that are in search of exactly the same thing
Elections » Political Leaders » Biography of Narendra Modi

Modi is the first Prime Minister of India who was born in 'Independent India’, that is, post-August 15, 1947. He is also the first Indian prime minister whose mother was alive when he took office. He holds the record of winning a Lok Sabha seat by the highest margin (about 5.70 lakhs; Vadodara). 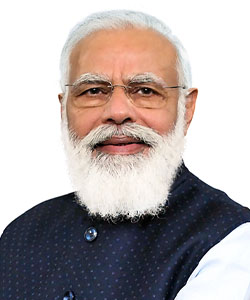 Narendra Modi is the current Prime Minister of India. He represents Varanasi constituency in the Lok Sabha. He is the most prominent leader of the Bharatiya Janata Party (BJP). He is considered a master strategist for his party. He has been the Chief Minister of Gujarat for four consecutive terms.

Narendra Damodardas Modi was born to a family of grocers in a town called Vadnagar in Mehsana district of Gujarat. He was born on 17 September, 1950 to Damodardas Mulchand Modi and Heeraben Modi. The couple had six children among which Narendra Modi was the third eldest.

Modi completed his studies against all odds. His saga of struggle began when as a teenager, he, along with his brother, used to run a tea stall near a railway station in Ahmedabad. He did his schooling from Vadnagar and obtained a master's degree in Political Science from Gujarat University. One of his school teachers described him as an average student but a brilliant debater. During his college days, he worked as a 'pracharak' (promoter) of the Rashtriya Swayamsevak Sangh (RSS). He left home at the age of 17 years and travelled across the country for the next two years.

At a later stage, during the 1990s, when Modi served as the official spokesperson of the BJP in New Delhi, he completed a three-month long course in the US on public relations and image management.

Narendra Modi always had the utmost zeal and enthusiasm to serve and help the people in need. As a young boy, Narendra Modi offered his services voluntarily to the soldiers at the railway stations during the Indo-Pak war in 1965. He also served affected people during the 1967 Gujarat floods. Modi started working in the Gujarat State Road Transport Corporation’s staff canteen. Eventually from there he became a full-time proponent and campaigner, commonly called a 'pracharak', of the RSS. Modi later underwent training at the RSS camp in Nagpur. It is a prerequisite for any RSS member to take up the training course for holding any official position in the Sangh Parivar. Narendra Modi was given charge of the student wing, which is better known as Akhil Bharatiya Vidyarthi Parishad (ABVP). His contribution to the Anti-emergency movement impressed senior political leaders. As a result of this, he was eventually appointed the regional organiser of the newly-formed Bharatiya Janata Party in Gujarat.

Narendra Modi was an efficient organiser from a very young age. During the Emergency, he arranged for covert circulation of RSS pamphlets and also organised protests against the Emergency rule. During his RSS days, he met the two Jan Sangh leaders, Vasant Gajendragadkar and Nathalal Jaghda, who later founded the state unit of BJP in Gujarat. In 1987, the RSS deputed Narendra Modi to politics by recommending his candidature in the BJP. Modi’s efficiency was recognised and he rose to prominence after managing the Ekta Yatra for Murli Manohar Joshi.

As the chief minister of Gujarat, Modi had promoted the state as 'Vibrant Gujarat' claiming that it had made rapid progress in terms of infrastructural development and economic growth. However, some critics also point out poverty, malnutrition and lack of proper education in the state. As per the statistics, the state ranked 14th in terms of poverty as on September, 2013 and 18th in terms of literacy rate in 2014. On the other hand, the state officials claim that the state outperformed other states in terms of women's education. Moreover, the school drop-out rates and the maternal mortality rates declined. Gujarat is also one of the states that does not suffer from the problem of land mafia.

Contrary to the claims made by the state officials, Christophe Jaffrelot, a political scientist said that the development in the state was limited only to the urban middle class. The rural people and those belonging to the lower castes were neglected by the government. According to Jaffrelot, under Modi's governance there had been an increase in the number of people living below poverty line. At the same time, the tribal and the Dalit communities were treated as subalterns. Other critics, including noted economist Amartya Sen, are also of the same view.

Narendra Modi- A Political Biography
Narendra Modi- A Political Biography' by Andy Marino attempts to provide a clear picture of Narendra Modi, the man and his politics. It enables the readers to get a better understanding of Modi's ways of governance. The book analyses the contrasting perspectives on the Gujarat model of governance. Andy Marino takes us through Modi's journey of life from childhood to a young man who went on to become India's Prime Minister.

Modi: Making of a Prime Minister: Leadership, Governance and Performance
The book by Vivian Fernandez is a peak into the political scenario of Gujarat and the way of Modi's governance from a viewpoint of a liberal Indian. In other words, the book does not take any stand or gives any judgment. Vivian describes the ways in which Modi utilised the opportunity to improve the economic conditions of the people of Gujarat.

The NaMo Story: A Political Life
'The NaMo Story: A Political Life' by Kingshuk Nag gives a brilliant portrayal of an exceptional politician, Narendra Modi, depicting his journey from a tea vendor's son to the Chief Minister of Gujarat. The book begins with a short history of the political situation and reforms of the 1990s. It goes on to describe how Modi utilised his administrative skills to build up the Hindutva agenda for the BJP.

Narendra Modi: The Gamechanger
Sudesh Verma's 'Narendra Modi - The Gamechanger' shows Narendra Modi as a game changer who knows how to impress and influence people with his work and turn the tables on his opponents. The book is based on all-inclusive interviews of Modi and his close associates about the things and incidents that shaped his thoughts and actions and the way Modi evolved as a man. An average man can find a reflection of his own struggle in the life of Modi.

Jyotipunj
'Jyotipunj' gives a description of all the people who Narendra Modi believes inspired him and had a strong influence on his work. Modi was associated with the Rashtriya Swayamsevak Sangh (RSS) initially as a worker and then as a ‘pracharak’. He gives a detailed insight into the life of the people who inspired him. The book also contains a reflection of thoughts of these people.

Abode of Love
‘Abode of Love’ is a compendium of eight short stories written by Narendra Modi. It was written by Modi at a very young age. These stories reveal the sensitive and affectionate aspect of his character. Modi believes that the love of a mother is the source of all love and it is the greatest love. Whatever be the kind of love – of lovers, of friends etc – all are the reflections of a mother's love. The book unravels the layers of human relationships in a beautiful way.

Premtirth
'Premtirth' is a collection of short stories written by Narendrabhai Modi. In this book, he draws a soulful portrayal of motherly feelings in a very simple and yet impressive language.

Kelve Te Kelavani
‘Kelave te Kelavani’ means ‘education is that which nurtures’. The book is a compilation of words of wisdom by Narendra Modi, India's Prime Minister. The book brings forth his thoughts and his vision to bring about a knowledge revolution in Gujarat. It shows his love for education.

Sakshibhav
'Sakshibhav' consists of a series of letters addressed to Jagat Janani Maa. It describes the journey of inner-self of Narendra Modi and his feelings. The book brings forth the emotional thoughts of Modi at the time of his struggle when he was a worker with RSS.

Samajik Samarasata
‘Samajik Samarasata’ is a compilation of Narendra Modi's articles and lectures. The phrase, “Express your views not just through words but through actions too”, aptly fits this book. The book reflects Modi's views on social harmony with no discrimination on the basis of castes and unravels many incidents of his interactions with dalits. The life incidents of many social reformers are also narrated.

'Convenient Action: Gujarat’s Response to Challenges of Climate Change' is Modi's first book in English. The book talks about the changes of climate in the state of Gujarat and how the people of the state respond to it. Under the leadership of Modi, people of the state found the ways to take up such challenges.
EBVD23.10.2014