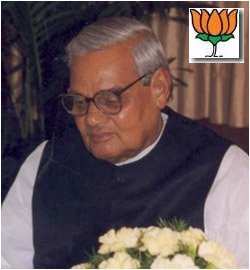 Atal Bihari Vajpayee, a former veteran Indian politician, was the 10th Prime Minister of India. His Prime Ministerial tenure includes three non-consecutive terms – the first for 15 days (from 16 May 1996 to 1 June 1996), the second for a period of 13 months (from 19 March 1998 to 26 April 1999) and the third for five years (from 13 October 1999 till 22 May 2004).
Over the course of his political career, he was elected nine times to the Lok Sabha or the Lower House of the Parliament and twice to the Rajya Sabha or the Upper House of the Parliament. He contested from four different states – Madhya Pradesh, Uttar Pradesh, Delhi, and Gujarat – in different elections. He was a member of the Bharatiya Jana Sangh party that was started by Shri Syama Prasad Mookerjee on 21 October 1951. The first election that Vajpayee won was from the Balrampur Lok Sabha (parliamentary) constituency of Uttar Pradesh in 1957. Vajpayee served as the President of the party from 1969 to 1972. Vajpayee also served as the Minister of External Affairs in 1977 when the Janata Party won the Lok Sabha elections and Morarji Desai became the Prime Minister of India. Atal Bihari Vajpayee was conferred upon India's highest civilian honour Bharat Ratna on 27 March 2015. For his 'active participation' in the country's struggle for freedom, Atal Bihar Vajpayee was felicitated with Bangladesh's Liberation War Honour by the Government of Bangladesh on 7 June 2015. Prime Minister of India Narendra Modi received the award on his political mentor's (Atal Bihari Vajpayee) behalf from the Bangladesh President Abdul Hamid, when the former was on an official tour to the neighbouring country. He breathed his last on 16 August 2018, after a prolonged illness.

Atal Bihari Vajpayee was born on 25 December 1924 in Gwalior, Madhya Pradesh to a middle-class Brahmin family of Shri Krishna Bihari Vajpayee and Smt. Krishna Devi. Pandit Shyam Lal Vajpayee, the grandfather of Atal Bihari Vajpayee, had migrated to Gwalior from their ancestral village Bateshwar in Uttar Pradesh. His father was a school master and a poet. Atal Bihar Vajpayee completed his schooling from Saraswati Shishu Mandir, Gorkhi in Gwalior. He completed his graduation in Hindi, Sanskrit, and English from Victoria College in Gwalior, now known as Laxmi Bai College. Thereafter, he studied in DAV College, Kanpur and completed his M.A. in Political Science with a first-class degree.

He is fondly called ‘Baapji’ by his close relatives and friends. He remained single for his entire life and later adopted a daughter named Namita. He loves Indian music and dance. Atal Bihari Vajpayee is a nature lover, and Manali in Himachal Pradesh is one of his favourite retreats.

He retired from politics due to health issues and was known to be suffering from dementia and diabetes. Close aides said that he failed to recognise people and mostly stayed at home, except for his check-ups that were conducted at the All India Institute of Medical Sciences (AIIMS).

His first encounter with politics occurred in August 1942 at the time of the Quit India Movement. Vajpayee and his elder brother Prem faced arrest for 23 days. He joined the Bharatiya Jana Sangh when it was newly formed in 1951 and subsequently, he was motivated by the party leader Shri Syama Prasad Mookerjee. Vajpayee was with Shri Syama Prasad Mookerjee when the latter observed a fast unto death in 1951 in Kashmir against the supposed inferior treatment shown towards non-Kashmiri visitors. During this strike, Shri Syama Prasad Mookerjee died in prison. Vajpayee studied law for some time but did not complete the course as he was more inclined towards journalism. This selection might have been influenced by the fact that he had been an activist in India’s freedom struggle since his student life. He served as an editor to publications like Panchjanya, a Hindi weekly; Rashtradharma, a Hindi monthly; and dailies like Veer Arjun and Swadesh. In 1951, he was one of the founders and members of the Bharatiya Jana Sangh.

Autobiographies Books and albums on Poetry