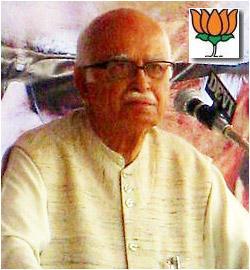 Lal Krishna Advani, a member of the Bharatiya Janata Party, is one of the senior-most leaders in Indian politics today. One of the eminent figures in Indian politics over the last few decades, he remained the Leader of Opposition in the 10th and 14th Lok Sabha or the lower house of the Parliament. His seniority and vast experience in Indian politics are evident from the fact that he played key roles both as a ruling party member and also as member of largest opposition party in the Lok Sabha. During the Bharatiya Janata Party-led National Democratic Alliance (NDA) government from 1998 to 2004, under the Prime Ministership of Atal Behari Vajpayee, Advani served as Home Minister and later as Deputy Prime Minister. This veteran leader walked the path of politics as a volunteer or sevak of a right-wing Hindu nationalist organization, the Rashtriya Swayamsevak Sangh.

Lal Krishna Advani was born on 8 November 1927 in Karachi (now in Pakistan) to Shri Kishinchand Advani and Gyanidevi. His family belonged to the Amil branch of Sindhi Hindus. The Amils were traditionally revenue officials who assisted the Munshis of the Muslim kings. They were a very renowned clan in Sindh and with time they dominated government jobs and professions in the area. His grandfather, Shri Dharamdas Khubchand Advani, a scholar of Sanskrit, was the principal of a government high school. His father was a businessman.

L. K. Advani completed his schooling in 1942 from one of the most highly rated schools in Karachi at that time, St. Patrick’s High School for Boys. He was a very good student. In 1942 he joined Dayaram Gidumal National College, Hyderabad (now in Pakistan). By this time the Quit India Movement was in full swing. He later completed his graduation in Law from Government Law College under Mumbai University. The Partition forced his family, like millions of others, to migrate to independent India. He married Kamalaji on 25 February 1965. Kamalaji had also migrated from Karachi. She worked in the General Post Office and was also a social welfare worker. They have a son Jayant, who is a businessman, and a daughter Pratibha, who is a well known television personality.

At the age of 14 years after his matriculation, Advani moved to Hyderabad as his father shifted base to Hyderabad from Karachi. Here he used to play tennis. One of his regular partners, Murli Mukhi, who was already a sevak of the Rashtriya Swayamsevak Sangh (RSS), introduced him to the organization. Inspired by their ideals of patriotism, discipline and various trainings imparted, Lal Krishna Advani joined the RSS and became a swayamsevak of the sangh.

At the age of seventeen he took his first job as a teacher of Mathematics, Science, History and English in Model High School in Karachi, now in Pakistan.

In 1943, just after a year he joined the RSS, he was sent to Indore for his first Officers’ Training Camp. It is mandatory for a sevak of the RSS to undergo training before holding any responsible position of the sangh. Thereafter he went to Ahmedabad and Nagpur to complete second and third years of training respectively. To start with, he looked after activities of the sangh in Alwar city, and was extended afterwards to the entire district and the neighbouring Bharatpur District. In 1947 he became the Secretary of the Rashtriya Swayamsevak Sangh in Karachi.