BJP has partnered with JD(U) and LJP. BJP's Candidates would be fighting in 67 constituencies while JDU and LJP are given 1 and 2 seats respectively. Congress is in alliance with RJD. Congress is contesting on 66 seats while four constituencies have RJD Candidate. The Election result 2020 will be out when the votes will be counted on 11 February. The polling is scheduled on February 8.

The AAP did far better in Delhi assembly election of 2015 than what Congress managed in the 2014 General elections. The Arvind Kejriwal led party reminded one of the historic win registered by former PM Rajiv Gandhi in 1984 general elections. The AAP emerged victorious in 67 of the 70 assembly constituencies of Delhi, is no less than a miracle. The BJP was reduced to a mere 3 seats, while the Congress and the rest were wiped out completely. But the AAP will have the immense pressure of expectations to deliver on the promises it made.

Delhi Assembly Elections Polling Statistics and Summary
The Delhi assembly elections became an event that caught the imagination of all of India and were not limited to Delhi only as far as its impact is concerned. The national capital of Delhi waited for a year for this moment to come, when it exercised its franchise to elect a government.

The people of Delhi did come out in higher number to vote this time as compared to 2013. Over 67 percent of electorate turnout was recorded on Saturday, just a notch above what it was in 2013 when it saw 66 percent of balloting.

810 candidates contested in the 2013 assembly elections. Out of these, 70 were women. Congress and Aam Aadmi Party fielded candidates for all 70 seats.

Under the general category, Vikas Puri assembly constituency has the largest number of voters (2,89,593), whereas Delhi Cantt has the least (1,11,668).

Under the SC category, the Bawana constituency holds the largest electorate, with a total of 276,393 voters, whereas the Ambedkar Nagar constituency has the smallest number (1,25,995).

According to the statistics, Narela is the largest constituency in terms of area (143.42 sq km). 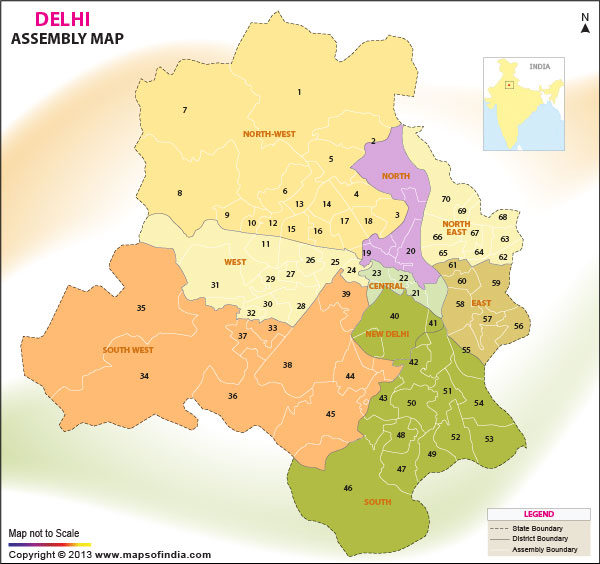 The tables below represent the assembly election results for the state of Delhi untill now starting from the most recent year 2015.