Track your constituency
Live News
Live News
PM, CM don’t work Without Seeking Nod of Gaming Industrialist Friends: Rahul in Chhattisgarh Deduction for Mortgage Interest. Taxpayers can express write-offs for real estate loan interest (HLI) under salaries tax and private evaluation. Get The Cash You Want for Unforeseen Expenditures The site’s character examination is helpful with regards to discovering the right match for you personally a people that are in search of exactly the same thing
Elections » Political Leaders » Priyanka Gandhi Biography 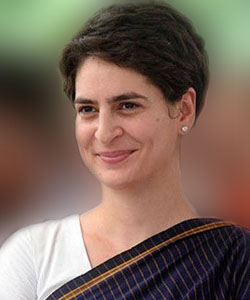 Who is Priyanka Gandhi?

Priyanka Gandhi is an Indian politician and daughter of former Prime Minister of India, Rajiv Gandhi and the current leader of the Indian National Congress, Sonia Gandhi

Priyanka Gandhi is an Indian politician and daughter of former Prime Minister of India, Rajiv Gandhi and the current leader of the Indian National Congress, Sonia Gandhi. Priyanka since her childhood has been brought and raised up amongst leaders, a legacy of the Nehru-Gandhi clan which she so rightly is a part of. Having said that, it was only natural for Priyanka to take the political route in her life! However, despite belonging to the first political family of the country, Priyanka has not shown any interest in contesting election as a politician actively. But that doesn’t put her out of the country’s political scene either. She believes in serving the people more than bagging a seat for herself. She has more than often quoted that she can and want to do things for people without being in politics. While it is mostly her mother, Sonia Gandhi, and brother, Rahul Gandhi, who have been serving the party, Priyanka’s contribution cannot be overlooked. She may not be the face of the Indian National Congress but she is definitely the pillar behind it. Her role in the party may be an ambiguous undefined one but she definitely contributes to the overall performance of the party. She is an extremely responsible citizen and an excellent organizer. She also plays the role of a chief advisor to her mother in matters of political interest. Her command over language, her confidence, her demeanour and her conviction to relentlessly serve the people of the country has been an inspiration to many women.

Priyanka Gandhi was born on January 12, 1972 in New Delhi, India. Her father, Rajiv Gandhi, was a scion of the Nehru-Gandhi clan and served as the Prime Minister of the country. Her mother, Sonia Gandhi, an Italian-born Indian belongs the Indian National Congress. She has an elder brother, Rahul Gandhi, who is a Member of Parliament and President of the Congress party. She did her schooling from Modern School and Convent of Jesus & Mary in New Delhi. After completing her schooling, she did her graduation in Psychology from Jesus and Mary College, University of Delhi

She is married to Robert Vadra, a businessman from Delhi. The wedding took place at the Gandhi home, 10 Janpath, on 18 February 1997 in a traditional Hindu ceremony. They have two children; a son Raihan and a daughter Miraya. Priyanka Gandhi is converted to Buddhism. She follows Buddhist philosophy and a practitioner of Vipassanā as taught by S. N. Goenka.

In the Indian general election, 2004, she was her mother's campaign manager and helped supervise her brother Rahul Gandhi's campaign. In the Uttar Pradesh assembly elections, 2007, while Rahul Gandhi managed the statewide campaign, she focused on the ten seats in the Amethi Rae Bareilly region, spending two weeks there trying to quell considerable infighting within the party workers over seat allocations. On January 23, 2019, Priyanka Gandhi formally entered politics, being appointed the Congress' General Secretary in charge of the eastern part of Uttar Pradesh.

Now on January 24, 2019, Priyanka Gandhi has been appointed general secretary of the Congress. For some time, this post was vacant. It is not that Priyanka is new in politics, even before that, her political field was limited to Amethi and Rae Bareli.
.
Previous Election Results
VIEW MORE
Upcoming Elections