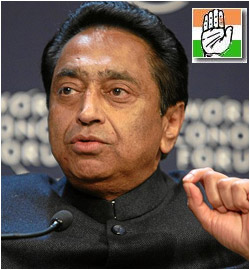 Kamal Nath, an Indian politician from the Congress party, is the Ex Minister of Urban Development. Kamal Nath is one of the longest serving and senior most members of Lok Sabha; the lower house of India's bicameral Parliament.He represents the Chhindwara constituency of Madhya Pradesh. He is a leader of the Indian National Congress (INC).Kamalnath was elected as the president of Madhya Pradesh Congress Committee in May, 2018to lead the party in upcoming assembly election of that year to be held in November-December 2018.

Kamal Nath was born on November 18, 1946 in Kanpur, Uttar Pradesh. He studied at The Doon School and graduated with B.Com. from the St. Xavier's College, University of Calcutta. He got married to Alka Nath on January 27, 1973.

Rice export accusations - In 2007, during Kamal Nath's tenure as Commerce minister, an Empowered Group of Ministers that included Nath, Pranab Mukherjee, and Sharad Pawar helped lift a ban on the export of non-basmati rice. It was alleged that PSUs involved in export of this rice to Africa outsourced the efforts to domestic private companies. It is claimed that the private companies made large profits while the PSUs reported small margins.

A book named India’s Environmental Concerns was published by him.

The table below shows the status of Kamal Nath and candidates contesting against him from Chhindwaraloksabha seat with their party names and symbols along with the votes secured by each candidate.