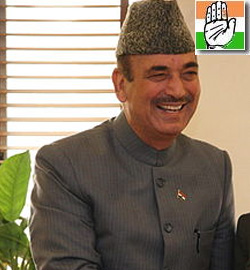 Ghulam Nabi Azad is an Indian politician, a Congress Party leader and was the Union Minister of Health and Family Welfare. He is often considered as the 'crisis manager' of the Congress party. He was the Parliamentary Affairs Minister of India in the government of Manmohan Singh till October 2005. He also became the first Congress CM of Jammu & Kashmir after a hiatus of 30 years.

Ghulam Nabi Azad is well-known for his organisational skills. He holds the enviable record of being the AICC General Secretary for nine times. He has been a member of the Congress Working Committee for over 18 years, which is close to the longest period served by any other party leader.

Ghulam Nabi Azad was born on 7 March 1949 in Kashmir's Doda district, which used to be the hotbed of militants. After attending school in his ancestral village he moved out of the native place to the Baderwah town to attend college. Azad was considered one of the most ambitious kids growing up in that region. He joined the National Cadet Corps as a student.

He moved to Jammu and finished his Bachelor's degree from G.G.M. Science College. He completed his Masters in Zoology from Kashmir University in 1972. In 1980, Azad tied knot with a renowned Kashmiri singer, Shameem Dev Azad.

Ghulam Nabi Azad's efforts to make India 'polio-free' were recognized by the UNICEF and WHO. Azad was awarded with a memento as a token of appreciation by senior officials from Unicef And Who.