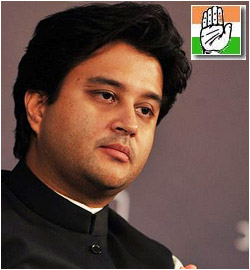 Jyotiraditya Madhavrao Scindia, a member of the Congress party, was the union minister of state for the Ministry of Power since November 2012. He is a member of parliament representing the Guna constituency of Madhya Pradesh. He is also the current nominal maharaja of Gwalior, which was a princely state of the British Empire in India.

He was born on 1 January 1971 in Mumbai as the son of Madhavrao Scindia, who was a Maharaja of Gwalior, a princely state during the British rule. His father represented the Guna Constituency in the Lower House of the Parliament. Scindia was just 31 when his father died in a plane crash, and so he joined politics to continue his father’s legacy.

Scindia, one of the richest ministers of India, is the grandson of the late Madho Rao Scindia, the last ruler of the Maratha princely state of Gwalior. He claims to be the sole inheritor of his father’s assets of Rs. 20,000 crores.

He graduated in Economics in 1993 from the Harvard University. He completed his M.B.A. in 2001 from the Stanford Graduate School of Business.He got married on 12 Dec 1994 to Priyadarshini Raje Scindia, the daughter of the royal family of Gaekwad Maratha. He has a son and a daughter.

Political activities and achievements of Jyotiraditya