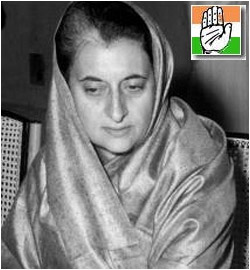 Indira Gandhi as a Prime Minister was considered fierce, cutthroat and remarkable with centralization of power. 1975 to 1977 saw her impose emergency on the country to crush political opposition. India achieved preeminence in South Asia with substantial economic, military and political developments during her leadership.The India Today magazine conducted a poll in 2001 that voted Indira Gandhi as the Greatest Prime Minister. In 1999, the BBC named her as the “Woman of the Millennium”.

Indira Gandhi was born on 19 November 1917 to Shri Jawaharlal Nehru and Smt. Kamala Nehru in Allahabad, India. Jawaharlal Nehru was one of the prominent players for India’s struggle for freedom from the British Raj. He later became the first Prime Minister of independent India. Indira Gandhi was the only child of her parents and grew up at her family estate in Allahabad called Anand Bhavan. Her childhood days were quite lonely, with her father staying away due to his commitments for the political activities or confined at prison. Her mother fell ill frequently and had to be bed-ridden from time to time; she finally died at an early age suffering from tuberculosis. Letters were her only mode of contact with her father.

She attended school intermittently until matriculation in 1934, and was more often taught at home. She also studied at the Viswa Bharati University in Shantiniketan. She, however, left the university and moved to Europe to attend to her ailing mother. She attended the Badminton School for a brief period after her mother passed away. Thereafter in 1937 she enrolled at Somerville College to pursue History. She was suffering from ill-health and had to be attended to by doctors constantly. Her studies got disrupted as she had to make repeated trips to Switzerland for recovery. Due to her ill health and other disruptions, she had to return to India without being able to complete her studies at the Oxford. However the Oxford University later conferred her with an honorary degree. In 2010 she was further honoured by the University of Oxford as one of the 10 illustrious graduates of Asia, the Oxasians.

She married Feroze Gandhi her husband, who was a Parsi from Gujarat. They knew each other from Allahabad and later met in the UK when he was studying at the London School of Economics. She chose her younger son Sanjay Gandhi as her heir in politics but after his sudden death in June 1980 in a flying accident, Indira Gandhi persuaded her elder son Rajiv Gandhi to join politics. Rajiv Gandhi at that time was a pilot who reluctantly quit his job to join politics in February 1981.

On 31 October 1984, Indira Gandhi was shot by her two bodyguards in the garden of her official residence of Prime Minister at 1, Safdarjung Road at New Delhi while she was passing the wicket gate guarded by them. The bodyguard Beant Singh shot her thrice while Satwant Singh fired almost thirty rounds, after which they dropped their weapons and surrendered. The other guards took the two to a closed room where Beant Singh was shot to death. Later Kehar Singh was arrested for his involvement in the conspiracy. Kehar Singh and Satwant Singh were given death sentence and hanged in Tihar Jail at Delhi.

Indira Gandhi was rushed to the All India Institute of Medical Sciences at 9:30 a.m. The doctors did their best but declared her dead at 2:20 p.m. On 3 November she was cremated near Raj Ghat, an event that was covered live by the media both nationally and internationally. The spot of cremation is now called Shakti Sthala.