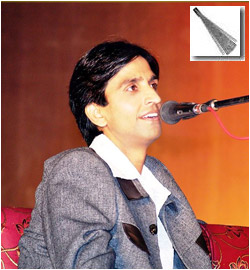 Who is Kumar Vishwas

Dr. Kumar Vishwas is an active member of the Aam Aadmi Party (AAP). He is a renowned and celebrated Hindi poet, and has become an icon among the youth of India. His popularity among the netizens and the youth can be gauged from the fact that millions of people watch his videos online and his official page on social networking sites garner millions of clicks in a month. A recognised communicator and motivator on various social issues, Dr. Vishwas is a professor of Hindi literature by profession. Apart from being a famous Hindi poet, he is a columnist with several publications on a regular basis, and has contributed as a writer during several apolitical social issues and campaigns. The anti-corruption movement led by Anna Hazare saw him as one of the many proponents of the movement.

Role of Kumar Vishwas in Assembly Elections of Delhi 2015

Dr. Kumar Vishwas did not contest the 2015 Delhi assembly elections, but took an active part in AAP's aggressive campaign. Before and during the run up to the Delhi elections, Vishwas delivered a number of controversial remarks that raised a lot of eyebrows and drew criticism for him. Eventually, the AAP registered a resounding victory winning 67 of the 70 assembly seats.

Dr. Kumar Vishwas hails from a Gaur Brahmin family in Pilkhuwa, Gaziabad in the state of Uttar Pradesh. He was born on 10 February 1970 to Dr. Chandra Pal Sharma and Smt. Rama Sharma as their youngest child. His father was a lecturer in the R.S.S. Degree College, Pilkhuwa, which is affiliated to the Chaudhary Charan Singh University of Meerut. His mother is a home maker. Vishwas has three brothers and a sister. His schooling started at Lala Ganga Sahay School, Pilkhuwa and thereafter he completed his intermediate from the Rajputana Regiment Inter College, Pilkhuwa. Dr Kumar Vishwas’s father wanted him to pursue engineering, but his passion for poetry led him to do a post-graduation degree in Hindi literature. He is also a Ph.D. in the subject.

After completing M.A. and Ph.D. in Hindi literature, Dr. Vishwas started his career in the year 1994 as a professor in Rajasthan. For the last sixteen years, he has been working in the Lala Lajpat Rai College, teaching Hindi literature to students of higher classes. As a Hindi poet, he has reached great heights and established himself as a poet of Shringara-Ras (Romantic Genre). His other professional activities include penning lyrics for different title songs of TV programmes, working as regular columnist writing articles for different magazines and many other publications, and also on different social issues. Common people, renowned leaders, journalists, business tycoons and famous personalities have all acknowledged and appreciated him as a poet and writer. Poems in his voice are used by major telecom operators as their caller tunes. He signed contracts with some of the prestigious banners of Bollywood and television production houses for writing lyrics, script, story and dialogues in their forthcoming ventures.

His live performances as a poet have seen transformation from traditional set-ups to more stylish ones, with music support, fancy lighting, projector screen displays and spot lights that enhance the mood and atmosphere of the performance.

His era as a performing poet has seen transformation from traditional set-ups to more stylish one, with music support, fancy lighting, projector screen displays and spot lights that enhance the mood and atmosphere of the performance.

How did Kumar Vishwas enter politics

The anti-corruption movement led by Anna Hazare saw Dr. Kumar Vishwas as one of the many proponents of the movement. He was also arrested on 16 August 2011 for supporting the movement.

Here's how the Aam Aadmi Party came into being. Sometime during the agitation, Arvind Kejriwal, one of the eminent supporters of the movement, had a difference of opinion with Anna Hazare, where Hazare wanted the Jan Lokpal movement to be politically neutral, while on the other hand Kejriwal was of the opinion that since no progress was attained through talks with different political parties, it was necessary to directly get involved in politics. India Against Corruption, the organisation guiding the movement, conducted a survey on this issue using social networking sites, the result of which indicated support for politicisation. Dr. Kumar Vishwas was one of many such renowned people who supported this move of Arvind Kejriwal.

A party was launched in Delhi on 26 November 2012 under the leadership of Arvind Kejriwal, and was named the Aam Aadmi Party (AAP), where "Aam Aadmi" means "the common man". Dr. Vishwas became a member of the Aam Aadmi Party. The party contested elections for the first time on 4 December 2013 for the Delhi Legislative Assembly.

Activities and achievements of Kumar Vishwas

Kumar Vishwas takes on Rahul Gandhi from Amethi
In the Indian General Elections of 2014, all eyes were on the Amethi seat as the Aam Aadmi Party’s Kumar Vishwas took on the future of the Congress party, Rahul Gandhi. Political analysts were pessimistic about Vishwas, given the iron grip that the Congress had on Amethi. However, the AAP, known for pulling major upsets before, were hoping for another one.

Vishwas highlighted the rampant corruption in the Congress party. He also asserted that Rahul Gandhi was unaware of India’s problems. But he did not succeed in trouncing Gandhi.