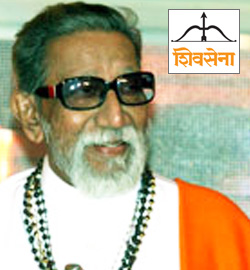 Bal Keshav Thackeray, an Indian politician, was the founder member of a right-wing ethnocentric Marathi party called the Shiv Sena. The party’s activities are mainly concentrated in the state of Maharashtra in the western part of India. Bal Thackeray opposed the migration and increasing influence of the non-Marathis in the city of Mumbai. He campaigned against it through his journal Marmik, which was a cartoon weekly. He plunged into politics to further this motto and formed a new party in 1966 called the Shiv Sena. The objective of the party initially was to make sure that Maharashtrians get job security in the state as they faced competition from the south Indian, Marwari and Gujarati immigrants. Temporary alliances with almost all the Maharashtrian political parties were made during late 1960s to early 1970s.
Although there were numerous controversies linking him, he was highly respected and adored by many Maharashtrians and is remembered as a courageous man. He is fondly called the 'Hindu Hriday Samraat' by his followers, which means "Emperor of the Hearts of the Hindus". A state funeral was accorded to him that saw mourners in large numbers. Bal Keshav Thackeray is the one such non-member of the Parliament who is present in the list of obituaries.

Bal Keshav Thackeray was born on 23 January 1926 in Pune, Maharashtra to Keshav Sitaram Thackeray. He hailed from a family of Marathi Chandraseniya Kayastha Prabhus. Keshav Thackeray was a writer, social activist and a prominent figure in the Samyukta Maharashtra Chalwal, a movement of the 1950s that advocated for a separate state for the Marathi-speaking population. Keshav Thackeray later left the movement because of his stand against the communists. Bal Thackeray’s philosophy in politics was highly motivated and influenced by his father Keshav Sitaram Thackeray. Bal Thackeray married Meena Thackeray, who was his constant source of strength. His three sons were Bindumadhav, Jaidev and Uddhav. On 20 April 1996, Bal Thackeray’s eldest son Bindumadhav expired in a road accident and in September 1996, his wife Meena died of a heart attack.

His career started as a cartoonist in Mumbai with The Free Press Journal, an English daily. The Sunday edition of The Times of India also featured his cartoons. He left the job in 1960 and founded Marmik, a new political weekly with his brother. Bal Thackeray and a few others including George Fernandes formed a news daily called News Day, but it survived only for a couple of months. Dopahar ka Saamana, a Hindi newspaper, and Saamana, a Marathi newspaper, were also founded by Thackeray.

On 17 November 2012 Bal Thackeray succumbed to death due to a cardiac arrest. The state of Maharashtra came under high alert, with the day witnessing the otherwise busy city of Mumbai coming to an absolute halt as the news of his death spread. Shops and other commercial hubs were closed immediately. The Prime Minister of India Manmohan Singh appealed to maintain peace and calm in the state. The Mumbai police, the Reserve Police Force of the state, and the Rapid Action Forces were posted. Eminent politicians expressed their condolences.

Mourners were present in large numbers, estimated at 1-1.5 million. Bal Thackeray was bestowed with a state funeral at the Shivaji Park, which became the second such public funeral in Mumbai, the first one being that of Bal Gangadhar Tilak in 1920. The otherwise rare 21-gun salute was given to honour Bal Thackeray. His son Uddhav Thackeray lit the pyre. The funeral ceremony was broadcast live ﻿by television channels.