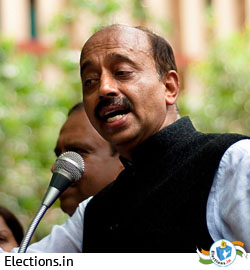 Vijay Goel, an eminent Indian politician, is a member of the Bharatiya Janata Party (BJP). He is a former Delhi University Student’s Union (DUSU) president. In February 2013, he became the President of the Bharatiya Janata Party in Delhi. He was elected thrice as Member of Parliament for the 11th, 12th, and 13th Lok Sabha, when he represented Chandni Chowk and Sadar constituencies of Delhi. During the National Democratic Alliance (NDA) government, until 2004 he held positions such as the Union Minister of State of Labour, Parliamentary Affairs, Youth Affairs & Sports, and Statistics & Programme Implementation. His successful effort in banning lottery under the banner Lok Abhiyan earned him nationwide fame, while saving lakhs of poor families from ruin.

Vijay Goel belongs to a family of freedom fighters from Sonepat, Haryana. He was born to Chatri Lal Goel and Basanti Devi on January 4, 1954. His father Chatri Lal Goel, a taxation lawyer, was a renowned personality. Chatri Lal Goel was a member of the Bharatiya Janata Party and served as Speaker of Delhi Vidhan Sabha. He was also the Deputy Mayor.

Vijay Goel is an alumnus of Shri Ram College of Commerce under the University of Delhi. By qualification he is an M.Com and LL.B. During Emergency in India, he was jailed for three months, along with his father Shri Chatri Lal Goel. Vijay Goel was a good basketball and Kho-Kho player and represented Delhi University and Delhi State, respectively. He married Preeti Goel on March 8, 1985. She is a professor at the University of Delhi. They have a daughter, Vidyun Goel, and a son, Siddhant Goel. By profession, Vijay Goel is a lawyer, trader and industrialist.

Goel has keen interest in music and art. He himself is a singer of ghazals and folk songs, besides playing the table. As an enthusiast in photography, he held two photo exhibitions on subjects related to rural life and nature. He also wrote a book on Chandni Chowk, called The Empire City.

Vijay Goel was born on 2 August 1956 to a Jain Bania family. He is a Bachelor of Arts degree holder. He has done LLB as well.

How did Vijay Goel enter politics?

Vijay Goel’s entry into politics happened in a gradual manner. His father was a member of the Bharatiya Janata Party, and later became a Speaker of Delhi Vidhan Sabha and Deputy Mayor. Vijay Goel was a member of the Rashtriya Swayamsevak Sangh (RSS) from a very early age. He joined NSS, NCC and Akhil Bharatiya Vidyarthi Parishad in 1972. In 1972-1973, he became the Joint Secretary of Students' Union at Shriram College of Commerce. In 1974-75 he was the Supreme Councilor of Delhi University Students Union, better known as DUSU, and also Treasurer of Akhil Bharatiya Vidyarthi Prarishad (ABVP). He went to jail along with his father for three months during Emergency in India. During 1977-1978, after he got released from jail, he became the President of Delhi University Student’s Union under the candidature of Akhil Bharatiya Vidyarthi Prarishad (ABVP). As a President of DUSU, he took up various students-related issues such as exposing rackets on fake SC/ST certificates, fake mark sheets, counseling students seeking admission in Delhi University, and banning ragging in colleges. In 1977 he joined BJP.

Activities and achievements of Vijay Goel

Activities and achievements of Vijay Goel

Global Excellence award and Sur-Sadhna Award for his contribution to the field of heritage, culture and development. Honorary Doctorate from Gurukul Kangri University of Haridwar