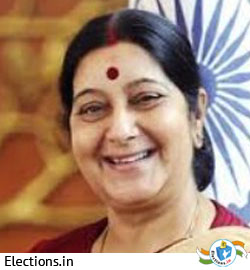 Sushma Swaraj was an Indian politician and member of the Bharatiya Janata Party. She was the Union Minister for External Affairs in the government of India. She had served as a member of parliament for the sixth term and was the leader of opposition in the 15th Lok Sabha. She twice became MLA from Haryana during 1977-1982 and 1987-1990, and once from Delhi in 1998. In October 1998 she held the position of the first woman chief minister of Delhi. Her political career graph is a manifestation of her role in Indian politics. She held key positions both as a member of the ruling party and as that of opposition. She was a role model for many such young women who aspire to tread the path of Indian politics.

In 1977, Sushma Swaraj became the youngest cabinet minister, at the age of 25 years. In 1996, during the thirteen-day government under the leadership of Atal Behari Vajpayee, she took a revolutionary step of live telecasting of Lok Sabha debates as the union cabinet minister for Information and Broadcasting. Sushma Swaraj was the All India Secretary of Bharatiya Janata Party as also the official spokesperson of the party.

Sushma Swaraj was born on 14 February 1952 at Ambala cantonment to Shri Hardev Sharma and Shrimati Laxmi Devi. Her father was an eminent member of the Rashtriya Swayamsevak Sangh. She completed her graduation in B.A with Political Science and Sanskrit as major subjects from the S.D. College of Ambala Cantonment. She did a degree course in LL.B. from the Department of Laws of the Punjab University at Chandigarh. In 1970 she received the Best Student award from S.D. College, Ambala Cantonment.

She was excellent in extracurricular activities. Some of her interests include classical music, poetry, fine arts and drama. She is also a keen reader of poetry and literature. Sushma Swaraj was declared the best cadet of N.C.C. of the S. D. College for three consecutive years. A state-level competition held by the Language Department of Haryana saw her winning the best Hindi Speaker award for three consecutive years. She also became the best speaker in Hindi of Punjab University in the A. C. Bali Memorial declamation contest and there she was awarded the university colour. She has won several awards of distinction in rhetoric contests, debates, recitations, dramas and other cultural activities. She was the President of Hindi Sahitya Sammelan of the State of Haryana for four years.

Sushma Swaraj married Shri Swaraj Kaushal, a criminal lawyer and a senior advocate of the Supreme Court of India on 13 July 1975. Shri Swaraj Kaushal became the youngest Governor in the country in 1990. During 1990 to 1993, Shri Swaraj Kaushal served as Governor of Mizoram. From 1998 to 2004, he was a Member of the Parliament. Their daughter, Bansuri Kaushal, is an Oxford University graduate and also a Barrister at Law from the Inner Temple.

In 1973 Sushma Swaraj started practicing as an Advocate before Supreme Court of India.

How did she enter politics?
Considered as the leader of the next generation, the inception of Sushma Swaraj in Indian politics was as a student leader in the year 1970. Many protests against the government of Indira Gandhi were organized by Sushma Swaraj. She is an exceptional speaker and campaigner, who, after joining the Janata Party, got actively involved in campaigning against the Emergency. Her quest in Indian politics saw her as the first woman Chief Minister of Delhi and later as the first woman Leader of Opposition. She became the State President of Janata Party in Haryana at an early age of 27 years.

US: Police Officer Killed Outside the Pentagon Police Building

PM Modi to Interact with NFSA Beneficiaries Under PMGKAY Today