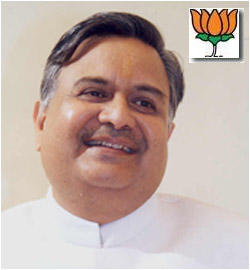 Raman Singh is an Indian politician and at present the Chief Minister of the state of Chhattisgarh since December 7, 2003. A member of the Bharatiya Janata Party, Raman Singh by profession is an Ayurvedic doctor.

Raman Singh comes from a family of farmers and was born on October 15, 1952. His father, Late Vighnaharan Singh Thakur, was a famous advocate and a social worker of Kawardha. His mother was Late Smt. Sudha Singh. He did his schooling from Chhuyikhadan, Kawardha and Rajnandgaon. He graduated in science from Government Science College, Bemetara from 1971 to 1972. Raman Singh also completed a bachelor’s degree in Ayurvedic Medicine (BAMS) from Government Ayurvedic College at Raipur. He practiced Ayurvedic Medicine in Kawardha after completing the course. Many a times he treated the poor free of cost, and his simplicity, openness and yearning to serve made him quite popular among the natives.

By profession Raman Singh is an Ayurvedic doctor from the Government Ayurvedic College at Raipur. He practiced Ayurvedic Medicine in Kawardha after completing the course.