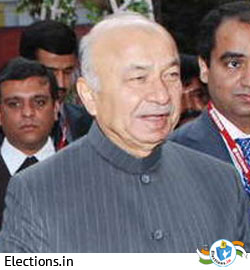 Sushil Kumar Shinde is a member of the Congress party. He was the Minister of Home Affairs in the Manmohan Singh government till May 26, 2014. He is from the state of Maharashtra. He was formerly the Chief Minister of Maharashtra. He also served as the Leader of the House in Lok Sabha. He is a soft spoken politician and is popularly a Gandhi family loyalist. He also worked as Congress Chief Sonia Gandhi’s election manager in Amethi.

Sushil Kumar Shinde was born on 4 September 1941 in Solapur district of Maharashtra. He was born to poor family to father Sambhajirao Shinde and mother Sakhu Bai. His family belonged to a Dalit caste.

His schooling was done in Solapur. He went to Sangameshwar and Dayanand College in Solapur for his B.A. and L.L.B degree. Later he also studied in Shivaji University, Kolhapur, and Maharashtra and in New Law College University of Bombay.

Sushil Kumar Shinde is married to Ujwala Shinde and has three daughters. One of his daughters, Praniti Shinde, is a Congress MLA from Solapur constituency in Maharashtra.

He began his career as bailiff in Solapur Court and then became a Sub-Inspector in Maharashtra Police for six years. Later he decided to join politics and contested from Karmala Assembly, his home district of Solapur in 1974. He went on to become a junior minister in the Government of the then Chief Minister of Maharashtra VP Naik. After that there was no looking back as Shinde became a popular politician in Maharashtra. He won the Maharashtra Assembly elections four times in 1978, ‘80, ‘85 and ‘90. He was also the state’s Finance Minister and presented nine budgets under different Chief Ministers. Shinde resigned from the Congress Party and joined the Progressive Democratic Front Government led by Sharad Pawar in 1978. However, he later rejoined Congress after the PDF was dismissed in 1980.

[an error occurred while processing this directive] He became known at the national level when he competed against Bhairon Singh Shekhawat of the National Democratic Alliance for Vice President. However, Shinde lost the elections. He became Chief Minister of Maharashtra in 2003. Later, he was sent to Andhra Pradesh as a Governor after his position as CM was taken up by Vilasrao Deshmukh in 2004. He was elected to the Rajya Sabha in 2006 and became Power Minister. After completing his tenure, he was again appointed as Union Cabinet Minister for Home Affairs in 2012. In 2014 Genaral elections, Shinde was defeated by Sharad Bansode of BJP with a margin of 1,49,674 votes.