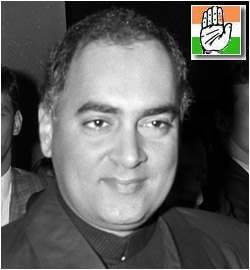 Rajiv Gandhi, an Indian politician and a member of the India National Congress party, is the sixth Prime Minister of India. He became the youngest Prime Minister of India in 1998 after his mother, the then Prime Minister of India Indira Gandhi, was assassinated by her bodyguards. This scion of the Nehru-Gandhi family served the post from 1984 to 1989. Rajiv Gandhi was by profession a pilot and worked with Indian Airlines. He married Antonio Maino, who changed her name to Sonia Gandhilater, and they settled in Delhi with their two children.

Rajiv Gandhi remained away from political life when his mother was serving as Prime Minister of India from 1966 till 1977 and again from 1980 till her assassination in 1984, while his younger brother Sanjay was actively involved in the political scenario. It was the unfortunate death of Sanjay Gandhi in 1980 in a plane crash that led the reluctant Rajiv Gandhi to join politics on his mother’s persuasion. He was made the General Secretary of the party, which was seen as a grooming process; he was inducted to organize the 1982 Asian Games. Rajiv Gandhi was appointed Prime Minister on 31 October 1984 after his mother was assassinated by her bodyguards.

Rajiv Gandhi was involved in several controversies like the anti-Sikh riots in 1984, the Shah Bano case, the Bhopal Disaster, and the Bofors Scandal. Rajiv Gandhi was assassinated during 1991 election campaigns by suicide bombers of the Liberation Tigers of Tamil Eelam (LTTE). In 1991 he was posthumously awarded the Bharat Ratna by the Indian Government.

Rajiv Gandhi was born on 20 August 1944 in Mumbai into the most famous and influential political family of the country. Jawaharlal Nehru was his maternal grandfather, who was the first Prime Minister of India and an aide of Mahatma Gandhi in the freedom struggle. Feroze Gandhi, his father, was a young member of the Indian National Congress and met Indira and her mother Kamala Nehru in Allahabad and befriended them while working for the party and later married Indira Gandhi. After Independence, the family settled in Lucknow and Feroze Gandhi started working as an editor of a newspaper called National Herald, that was founded by Motilal Nehru. Rajiv Gandhi later moved with his mother and younger brother to their grandfather Jawaharlal Nehru’s residence in 1949. Relations between his parents strained slowly and further deteriorated when Feroze Gandhi challenged corruption within the party leadership over the scandal of Haridas Mundra. The family reconciled after Feroze Gandhi suffered a heart attack in 1958. Feroze Gandhi died of a second heart attack in 1960.

Rajiv Gandhi completed his schooling from the Welham Boys' School and the Doon School in Dehradun. In 1961 he went to London to study A-levels. He then joined Trinity College of Cambridge for an engineering course but did not complete the degree course and left in 1965. He then joined Imperial College in London in 1966 but left the place a year later without the degree. He started working as a professional pilot for Indian Airlines. He married Sonia Gandhiin 1968, who was originally an Italian and worked as a waitress in the Varsity Restaurant, a Greek restaurant in the city of Cambridge. They had their first child Rahul Gandhi in 1970 and their Second child Priyanka Gandhi in 1972.

How did Rajiv Gandhi enter politics?

Rajiv Gandhi’s younger brother Sanjay Gandhi’s sudden death in a plane crash in 1980 led him to join politics. Rajiv Gandhi reluctantly joined Indian politics at the behest of his mother, the then Prime Minister of India Indira Gandhi, and pressure from the Congress party. Both he and his wife were opposed to the idea of his joining politics but he eventually declared his candidature from Amethi, which was Sanjay Gandhi’s Lok Sabha constituency. He defeated Sharad Yadav and was made the General Secratary of the Congress, which would serve as his grooming process. His close friend the then Sports Minister Sardar Buta Singh was the President of the committee. He also became the President of the youth wing of the party, the Youth Congress.

On 31 October 1984 while Rajiv Gandhi was in West Bengal, Indira Gandhi was shot by her two bodyguards in the garden of her official residence, at 1, Safdarjung Road at New Delhi while she was passing the wicket gate guarded by them. The bodyguards namely Beant Singh and Satwant Singh, after shooting her, dropped their weapons and surrendered. Beant Singh was shot to death on that day while Kehar Singh was arrested for his involvement in the conspiracy. He and Satwant Singh were given death sentence and hanged at the Tihar Jail at Delhi. Within hours of the assassination, the then President Zail Singh and Union Minister and a senior leader of the Congress party Sardar Buta Singh convinced him to become the new Prime Minister of India. After he assumed office, Rajiv Gandhi asked Zail Singh to hold fresh elections and dissolve the Parliament as the Lower House completed a five-year term. The history of the Indian Parliament saw a landslide victory for the party, which gave Rajiv Gandhi complete power of government. He also became the President of the Congress party.

Policies under his Premiership
Economic Policy Foreign Policy
He led in a significantly different direction from his mother Indira Gandhi’s socialism. Bi-lateral relations with the US were improved that were long-strained during the period of Indira Gandhi, owing to her closeness with the then USSR. Scientific and economic cooperation was expanded.

Rajiv Gandhi was assassinated on 21 May 1991 in a village called Sriperambudur, about 50 km from Chennai. He went there on a public meeting while campaigning for the Congress candidate for the Sriperambudur Lok Sabha constituency. He was approached by a lady later identified as Thenmozhi Rajaratnam at 10:10 p.m. in the public gathering. When she bent down as if to touch Rajiv Gandhi’s feet, she detonated an explosive that was attached to a belt tucked under her dress. Rajiv Gandhi, the assassin, and 25 others were killed in the blast. His mutilated body was taken to New Delhi’s All India Institute of Medical Sciences for post-mortem and reconstruction. His funeral on 24 May 1991 was attended by dignitaries of over sixty countries and was telecast live. The site of his cremation is now known as Vir Bhumi.