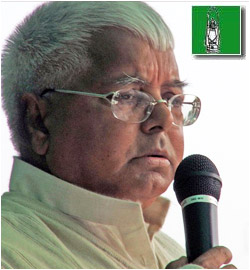 Lalu Prasad Yadav is an Indian politician belonging to the political party Rashtriya Janata Dal. He founded the party in 1997 after breaking off from the Janata Dal over the issue of Fodder Scam. He was the first president of the newly founded party and remains its president to this day. He has held prominent posts both in the Parliament and the state legislative assembly. From 2004 to 2009 he served as the Railway Minister under the Congress-led United Progressive Alliance (UPA) government. He is the former Chief Minister of Bihar, having held the post from 1990 to 1997. He got elected from the Saran constituency in Bihar as a Member of Parliament (MP) of the 15th Lok Sabha but was disqualified from the post when he was convicted for his involvement in the Fodder Scam of 1996. A sentence of five years of rigorous imprisonment and a fine of Rs. 25 lakh was ordered. On 13 December 2013, hearing his appeal, the Supreme Court of India granted him bail on one of the six cases registered against him on the Fodder Scam issue.

There are several other corruption cases against Lalu Prasad Yadav that are currently sub-judice. He is known to be a crowd-puller and a master politician with unique oratorial skills. He has faced criticism for advocating and supporting casteism in politics.

Lalu Prasad Yadav was born on 11 June, 1948 in Phulwaria which is situated in the Gopalganj district of the state of Bihar. He is the second son of a poor peasant family of Shri Kundan Rai and Smt. Marachhiya Devi. He did his primary education in a school at Bihar Military Police No. 5. Here he studied up to seventh standard. Thereafter, he along with his elder brother shifted to Patna. He completed his Bachelors degree in Law and Masters degree in Political Science from B.N. College under the University of Patna. He worked as a clerk after his graduation in the Bihar Veterinary College in Patna. His elder brother also worked there as a peon.

On 1 June 1973, Lalu Prasad Yadav married Rabri Devi. The couple has seven daughters: Misha, Rohini, Bharti, Chanda, Hema, Rajlakshmi and Dhannu. Their two sons are Tej Pratap and Tajashwi. When Lalu Prasad Yadav resigned as Chief Minister of Bihar in the year 1997 following corruption charges against him for his involvement in 1996 Fodder Scam, Rabri Devi became the Chief Minister of Bihar and remained so until 2005, with brief interruptions. This move was highly criticized by opposition parties, who accused Rabri Devi of serving as Lalu Prasad Yadav’s surrogate.

In 2004, Lalu Prasad was awarded an Honorary Doctorate by Patna University, which he turned down.

Professional background and entry in politics

Lalu Prasad Yadav’s first step in Indian politics was as a student. He contested in the Patna University Union elections. This step was considered to have given him the Janata Party membership to contest and become a member of the 6th Lok Sabha in 1977. He became one of the youngest members of the then Parliament at the age of 29 years.