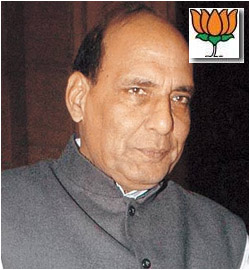 Rajnath Singh, an Indian politician, is a member of the Bharatiya Janata Party (BJP). He is currently the Union Minister of Home Affairs in the BJP-led NDA government of India. He was formerly the president of the Bharatiya Janata Party. A physics lecturer by profession, Rajnath Singh has long-time ties with the Rashtriya Swayamsevak Sangh, which facilitated his entry into Indian politics.

Rajnath Singh was born on July 10, 1951 to a family of farmers in a village called Bhabhaura in Chandauli District of Uttar Pradesh. His father was Shri Rambadan Singh and mother was Smt. Gujarati Devi. He completed his basic education in his village and thereafter finished his master's degree in Physics with first division from Gorakhpur University of Uttar Pradesh. Rajnath Singh worked at the K.B. Post Graduate College at Mirzapur, Uttar Pradesh, as a lecturer in Physics. He is married to Savitri Singh and the couple have two sons and one daughter.