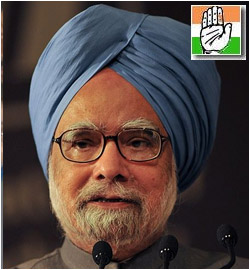 Before beginning his political career, Manmohan Singh held prominent positions in different organisations. His career started with the United Nations in 1966. His bureaucratic career saw him holding key posts such as an advisor to the Foreign Trade Ministry, Chief Economic Advisor to the Government of India, Governor of Reserve Bank of India and Head of Planning Commission. His political career began in 1991 when India was going through a serious economic crisis. The then Prime Minister of India, P.V. Narasimha Rao, commissioned him as the Finance Minister. He was also the Leader of Opposition in the Rajya Sabha from 1998 to 2004 when Atal Behari Vajpayee was the Prime Minister.

Manmohan Singh was born on 26 September, 1932 to a Sikh family of Gurmukh Singh and Amrit Kaur in a place called Gah in Punjab of undivided India. He was raised by his paternal grandmother after his mother’s demise when he was quite young. Later, during the Partition, his family migrated to Amritsar in India. He was a brilliant student all along his academic career. He completed his Bachelor’s and Master’s degree from Punjab University in 1952 and 1954 respectively. In 1957, he earned a degree in Economics from the University of Cambridge and later in 1962, he completed his D.Phil. in Economics from Nuffield College under Oxford University. Manmohan Singh’s favourite pastimes include reading and writing.

Manmohan Singh married Gursharan Kaur in 1958. The couple is blessed with three daughters, Upinder Singh, Amrit Singh and Daman Singh. Upinder Singh is a history professor at the University of Delhi. Books written by her include 'A History of Ancient and Early Medieval India' and 'Ancient Delhi'. Amrit Singh works at the American Civil Liberties Union as a staff attorney. Daman Singh is a graduate from the Institute of Rural Management in Anand, Gujarat and from Delhi’s St. Stephen’s College. She is married to I.P.S. officer Ashok Patnaik. Books written by Daman Singh include 'Nine by Nine', a novel, and 'The Last Frontier: People and Forests in Mizoram'.

His entry in Indian politics happened out of the blue in 1991 when the then Prime Minister of India, P.V. Narasimha Rao, inducted him in his cabinet as the Union Finance Minister. At that point of time, India was going through a serious economic crisis.

Other Activities and Associations

He wrote the book 'India's Export Trends and Prospects for Self-Sustained Growth' in the year 1964. He has also written articles that were published in various economics journals.