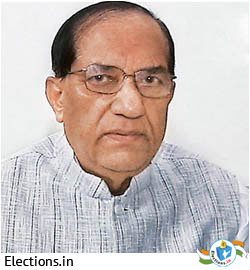 V. K. Malhotra was born on December 3, 1931 in Lahore city (now in Pakistan) during the British rule. He was the eldest son of a middle-class family of Dr. Khazan Chand Malhotra and Smt. Sushila Devi. His father was a well known Ayurveda doctor. Both his parents were followers of Arya Samaj and his mother worked in several Arya Samaj organisations. They believed in equality and imparted contemporary education to all their seven children, which included five daughters and two sons. Their high moral values and intellectual thinking helped their children, including Vijay Kumar Malhotra, grow up a in liberal environment.

Malhotra was a brilliant student and graduated young, at the age of 18 years. Considered a prodigy in Mathematics, Malhotra was promoted twice in school due to his outstanding performance. He attended the D.A.V. College at Lahore (under Punjab University) and the Hansraj College (under University of Delhi). He is an M.A. in Hindi and Doctorate in Literature. His subject of thesis was the renowned poet Shri Sohan Lal Dwivedi and his writings. He has a great interest in mythology, history and Vedic literature. He has profound knowledge of Holy Books such as the Bhagvad-Gita, the Koran, the Bible and the Guru Granth Sahib.

Vijay Kumar Malhotra is an educationist and has played several roles such as journalist, writer, sports administrator and social worker. He was a professor of Hindi for over 35 years at the P.G.D.A.V. College under the Delhi University.

How did he enter politics?

During the partition of India, Malhotra played a key role in protecting and saving thousands of lives at his risk. In 1947, when Pakistan invaded Jammu & Kashmir, he actively worked as a Pracharak of Rashtriya Swayamsevak Sangh (RSS) in Jammu & Kashmir. He was a student leader and later became secretary of Punjab University Camp College Students' Union. His earlier day saw him as Secretary of the Delhi University Students' Union, and also Prime Minister at the Hans Raj College Parliament. Malhotra was among the founders of the Akhil Bharatiya Vidyarthi parishad (ABVP) and became its secretary. He was also the secretary of Delhi Jana Sangh in 1951 when it was founded.

Projects taken up by Vijay Kumar Malhotra in 2008 after becoming an MLA after winning the assembly election from the Greater Kailash Assembly Constituency are:

Contributions and efforts as Chief Executive Councillor of Delhi

Contributions and support in the field of sports: