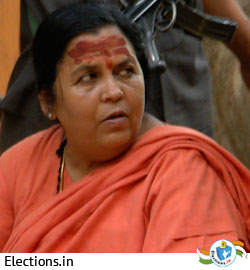 Uma Bharti is an Indian politician belonging to the Bharatiya Janata Party (BJP). Uma Bharti is known for her stringent religious beliefs and is popular as the 'sanyasin' politician. She played a key role in the Ram Janmabhoomi Movement of Ayodhya. Presently, she is the Union Minister for Water Resources & Ganga Rejuvenation.

Uma Bharti was born on May 3, 1959 in Tikamgarh, Madhya Pradesh to a religious Lodhi family of peasants. She has attended school up to sixth standard. She is unmarried. Some of her published writings are: