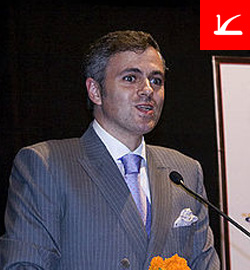 Omar Abdullah is a politician belonging to the National Conference (NC) party in Jammu & Kashmir. Omar took oath as the 11th Chief Minister of Jammu and Kashmir in the year 2009, when his party joined hands with the Indian National Congress (INC) and formed a coalition government in the state. He is a member of the Abdullah family, which has been one of the most influential and politically prominent families of Jammu and Kashmir for generations.

Omar Abdullah was born in Rochford, Essex in the United Kingdom on 10 March 1970. His father Farooq Abdullah became the Chief Minister of Jammu and Kashmir thrice (1982, 1986 and 1996) and has been the president of the National Conference party from 1981 to 2002 and 2009 till date. Omar Abdullah’s mother Mollie is British by origin.

Omar is the grandson of Sheikh Abdullah, also known as Sher-e-Kashmir, who formed the first ever political party of Kashmir, the Muslim Conference, in 1932. The name of the party was later changed to the National Conference. Sheikh Abdullah was the Prime Minister of Jammu and Kashmir from 1948 to 1953. He became the Chief Minister twice (1975 and 1977).

Omar studied at the Burn Hall School in Srinagar and then Lawrence School, Sanawar in Himachal Pradesh. He went to the University of Strathclyde in Scotland for his B. Com and MBA degrees. He married Payal Nath on 1 September 1994 and the couple had two sons Zamir and Zahir. Omar and Payal separated in 2011. The younger sister of Omar Abdullah, Sara Abdullah, is married to Congress leader Sachin Pilot, the son of late Rajesh Pilot. Omar Abdullah’s favourite pastimes includes reading, travelling, swimming and skiing.

Omar Abdullah was elected to the Lok Sabha in the year 1998 from Srinagar constituency. But when the 13-month-old Bharatiya Janata Party-led government was ousted by one vote on April 17, 1999, elections were held again. Omar got re-elected for his second term as a Member of Parliament and took charge as Union Minister of State for Commerce and Industry in the then NDA Government led by Atal Bihari Vajpayee. He is credited for becoming the youngest union minister at the age of just 29 years. In 2001, he was appointed as the Union Minister of State for External Affairs in the same government until his party National Conference snapped its ties with the NDA in 2002. In the same year, his father Farooq Abdullah passed on the party’s leadership to him and Omar was elected president of National Conference. Subsequently, he was re-elected as the party president in 2006.

Omar Abdullah in the 2014 Assembly Elections

The National Conference had emerged as the single largest party in the 2008 Assembly elections under Omar’s leadership. It formed the government with the support of the Congress. Omar Abdullah took over as the J&K Chief Minister. Omar has served the state as a dynamic and enterprising chief minister. However, he has been widely criticised for the mishandling of the relief and rehabilitation measures after the recent floods hit the state.

In 2014, he contested from the two seats of Sonawar and Beerwah, out of which he won only Beerwah, and that too by a very narrow margin. His party lost the elections and sat in opposition while the government was formed by alliance partners PDP and BJP. Omar had to resign from his post to give way for PDP party chief Mufti Mehbooba Sayeed.