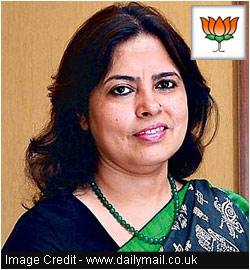 Dynamic and versatile face of BJP, Meenakshi Lekhi is the national spokesperson of the party. A Supreme Court lawyer, Lekhi is a member of Parliament from the New Delhi parliamentary constituency and has earned the distinction of defeating veteran Congress leader Ajay Maken with a margin of over 1.5 lakh votes in her first Lok Sabha election.

Considered as one of the strongest leaders of BJP, Meenakshi Lekhi graduated from Delhi University’s Hindu College, and completed her LLB Degree from Campus Law Centre and registered with Delhi-Bar Council in the year 1990.

She has practised in various courts, including several tribunals, Delhi High Court and the Supreme Court. She has also practiced in a range of forums across India and also handled a range of issues pertaining to women in the courts, such as domestic violence, family law disputes and most importantly the issue of permanent commission of the lady officers in the armed forces. She has also been a social activist and has been associated with several institutions, including National Commission for Women, Sakshi, NIPCD and several other organisations which are known for being protectors of the rights of women and children in the country.

Lekhi has also given lectures at the National Human Rights Commission and has also been associated with the drafting committees of the Women’s Reservation Bill and Problem of Sexual Harassment at Workplace bill, besides being Joint Secretary of Blind Relief Association and Vice Chairperson of JPM Blind School.

She has debated over several issues over television shows and in various articles in newspapers. Lekhi belongs to a family of prominent lawyers, as her husband and her father-in-law both have been leading lawyers and have handled several important and popular cases. Her husband senior advocate Aman Lekhi has been known for handling cases such as Lajpat Nagar bomb blast, Vasant Kunj multiple murders, etc besides arguing in the matter pertaining to the Right to information, 2G Spectrum, among others.

Her father in law late Pran Nath Lekhi, as a Supreme Court lawyer, has been widely known for handling case of Satwant Singh, the murderer of Indira Gandhi and Zahira Sheikh, who was one of the victims in 2002 Gujarat violence.

As she was associated with several NGOs, she also worked with Swadeshi Jagran Manch, an organisation associated with Sangh Parivar and from there she was invited by ex-BJP president Nitin Gadkari to join BJP in its Mahila Morcha (women’s wing) as its Vice President and from there her political career took off.

Lekhi is also the chairperson of NDMC and is looked upon as a potential Chief Ministerial Candidate of BJP in Delhi.

Apart from political successes, like defeating Congress leader Ajay Maken in her first Lok Sabha election, Meenakshi Lekhi has also figured in many controversies. The first among those erupted when she allegedly revealed the name of the victim in Tarun Tejpal rape case in a tweet. However, she claimed that the said tweet was not done by her, but someone had misused her smart phone.

Another controversy created by her came up in the public when she went for filing her nominations driving a jeep by herself without fastening the seat belt. And then the third controversy came up last year over her alleged sexist slandering of Ishrat Jahan over a TV channel. Several women had signed a letter asking for Lekhi to apologies for her comment and the letter was sent to National Commission for Women for taking an action.

However, among her noteworthy achievements include a Constituency Connect app that she has launched for the Citizens of the capital to establish contact with their MPs. With the help of this app, they can register their complaints as well as provide their feedbacks.
WBSKJ02.12.2014
EBVD