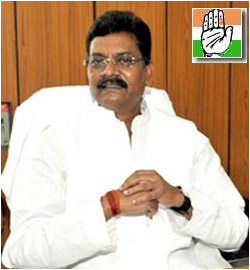 Dr. Charan Das Mahant, an Indian politician, is a member of the Indian National Congress. He has been the MP from the Korba Lok Sabha constituency of the state of Chattisgarh.He first won the Lok Sabha seat in 1998 and then was re-elected in 1999 and 2009. He is the Minister of State for Agriculture and Food Processing industries. Dr. Mahant was also appointed as the Working President of the Chhattisgarh Pradesh Congress Committee.

Dr. C. D. Mahant was born on December 13, 1954 in Saragaon in the Jangir Champa District of Chhattisgarh. His father, Late Shri Bisahu Das Mahant, was a former congress MLA and state minister from Champa, besides being a well-known social worker. His mother was Late Smt. Janki Devi. Dr. Mahant’s educational Qualifications are: M.Sc., M.A., LL.B. and Ph.D. He studied at the Motilal Vigyan Mahavidhyalay under Bhopal University, and at Barkatulla University in Bhopal, in the state of Madhya Pradesh. Dr. Charan Das Mahant married Smt. Jyotsna Mahant and they have three daughters and a son. By profession he is an agriculturist, apart from being a politician and social worker. His interests and favourite pastimes include painting, music, sports, reading, participating in debates, travelling and spending time with members of the family.


[an error occurred while processing this directive]

Other activities and accomplishments