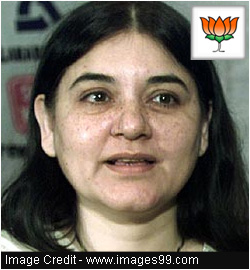 Maneka Gandhi, a prominent Indian politician belonging to the Bharatiya Janata Party (BJP). She is currently the Minister for Women & Child Development in Prime Minister Narendra Modi's NDA government. Apart from being a politician, she also works for the animal rights and is a known environmentalist. Her dedication in working towards the welfare of animals is manifest in the books written by her in which she talks about the various laws on and for animals. Some of the books written by her include Etymological Directories, Animal Activism and Laws etc. What may come as a surprise to everyone is that she is also a former model. Being the widow of Sanjay Gandhi, she belongs to famous Nehru-Gandhi family.

Maneka was born to a Sikh family in Delhi. Her father was Lt. Col. Tarlochan Singh Anand and mother Amteshwar Anand. She was born on August 26, 1956. She did her schooling and graduation in Delhi. She met Sanjay Gandhi for the first time during her brief stint in modelling. The two got married on September 23, 1974. The couple has a son Varun Gandhi who is also a politician.

Being the Founder Editor of Surya which is a political magazine, Maneka accompanied her husband in his political trips. Maneka used the magazine as a means to defend the Congress party after its defeat in 1977. The interviews of Indira Gandhi in the magazine helped the Congress party improve its image among the general public. It was the sudden death of Sanjay Gandhi that forced Maneka to enter into politics in the year 1982. In the subsequent year, after falling out with the Gandhi family, she formed her own party called 'Sanjay Vichar Manch'. The main focus of the party was on the employment and empowerment of the youth. The party contested Andhra Pradesh state elections and won four seats. The party was merged with the Janata Dal in 1988. Maneka was appointed as its General Secretary. The party won its first elections in 1989. Maneka was appointed as the Environment Minister and served a tenure of three years from 1989 to 1991. During her tenure, she created a different department for animal welfare. A number of laws were made by her not only in the field of animal welfare but also for the protection of the country's historical monuments.

In the year 1996, she contested successfully from Pilibhit as an independent candidate. Maneka also won the elections in 1998. In the year 1999, she supported BJP and was appointed as the Minister for Social Justice and Empowerment. During the period, she initiated many reforms in the project OASIS (Old Age Social and Income Security). This resulted in the New Pension System (NPS) which came into effect from 2004. Understanding her duty towards her country, she worked for the welfare of the people. For instance, the laws relating to adoption were made easier. She also created a helpline for the children living on the streets.

Maneka joined BJP in 2004. She contested the general elections from Pilibhit again and won. It was her efforts in the development of Pilibhit that made her extremely popular and people always voted for her. In the year 2009, her son Varun contested and won from Pilibhit while she won the seat from Aonla.

Maneka Gandhi played a key role in bringing the issue of animal rights to the forefront. In 1995, she became the chairperson of the Committee for the Purpose of Control and Supervision of Experiments on Animals (CPCSEA). The members of the committee made surprise checks in the laboratories where research was carried out on animals. She also started the organisation called 'People for Animals' for the welfare of animals. To make people aware about the sufferings of animals, she anchored a TV show, 'Heads and Tails'. Maneka has made many regulations for the protection of animals.

Penguin Book of Hindu Names
Finding a name for your child is not an easy task. At this time,'The Penguin Book Of Hindu Names' by Maneka Gandhi comes as a handy source. The book contains 20,000 Hindu names wherein the meaning of each name is elaborately explained along with the source of information. The meaning of the name is explained not only in Indian language but also the connotations the word has in English. The book is helpful not only for parents but also for the readers and scholars who are interested in knowing the meanings of Hindu names.

The Complete Book of Muslim and Parsi Names
Are you a Muslim and looking for the name for your newborn? 'The Complete Book of Muslim and Parsi names' by Maneka Gandhi is a solution to all your problems. The book compiles 30,000 names in 10 languages. It contains names from Arabic, Persian, and Turkish. The origin and meaning of each name is clearly explained for the reader. The book also gives a transliteration system so that the reader is not faced with the pronunciation problems of the names. The only drawback of the book is that the male and female names are not segregated.

Penguin Book of Hindu Names for Boys
The most exciting feature of 'The Penguin Book Of Hindu Names For Boys' is that it also contains modern and popular names apart from Hindu names. The book contains more than 20,000 names along with their source of origin. It gives parents the ample scope to choose a name for their baby boy. The book not only contains the list of names that one looks for but also serves as a guide for the people who wants to know the meanings of various names. With this book choosing the name for your boy becomes the easiest task.

Brahma's Hair
Indians have countless beliefs about trees such as only coconuts can be offered in temples, one should not sleep under a tamarind tree and so on. But are you aware of the reasons behind these beliefs? Maneka Gandhi's 'Brahma's Hair' gives answers to all these questions. The book is a compendium of mythology of Indian plants. Most of the stories regard trees as having heavenly origin. But some of the tales give ghastly explanations of the trees as well. The book also features biological names of the trees.

Rainbow and Other Stories
'Rainbow and Other Stories' by Maneka Gandhi is an exciting book for children. It contains six stories. One of the stories that is most enjoyed by children is 'Prince Boulababa'. It is a story of a fat greedy king who always thinks about food. The other story of interest is 'The Rainbow'. It talks about the togetherness of sunlight and rain that brings about a rainbow into existence. Like all other children's books, each story contains a moral.