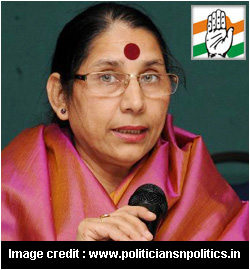 Krishna Tirath is a recent entrant to Bharatiya Janata Party (BJP). She has been associated with the Indian National Congress (INC) for years. She was a Member of the 15th Lok Sabha from the North West Delhi Parliamentary constituency of Delhi. As a Minister for Women and Child Development in the Sheila Dikshit government, Krishna Tirath is said to have contributed a great deal towards protection of child and women rights.

Krishna Tirath was born on March 3, 1955 in Karol Bagh area of New Delhi. She attained a Master of Arts (M.A.) degree and a B.Ed degree from the Delhi University. She is married to Vijay Kumar and has three daughters with him.

Krishna Tirath began her political career in 1984 when she was elected to the legislative assembly of Delhi for the first time. Mrs. Tirath was appointed as the Minister for Social Welfare, SC & ST and Labour & Employment in the Delhi government led by the then Chief Minister Sheila Dikshit in 1998.

In 2003, Sheila Dixit threatened to dissolve her entire Council of Ministers considering Tirath to be a part of the dissident group that wanted to make her resign from her post. Consequently, Tirath resigned from her ministerial post and became the Deputy Speaker of the house.

Krishna Tirath laid emphasis on the welfare of the underprivileged children and better care and support for women. She had once emphasised that the employed husbands should pay a part of their salary to their wives. This was aimed at social empowerment of women. In her meeting with the United States Secretary of Health and Human Services Kathleen Sebelius in 2012l, Tirath expressed her concern for children who were a victim of malnutrition in India. She said that the agencies such as Integrated Child Development Services could be great contributors for implementing improvements in education, immunisation and supplementary nutrition to improve the lot of children in India.

Krishna Tirath could not avert a controversy in 2010. To mark the National Girl Child Day on 24 January 2010, a picture featuring former Pakistani Air Chief Marshal Tanvir Mehmood Ahmed in uniform with the then Prime Minister of India Manmohan Singh and Congress President Sonia Gandhi was published in a full page newspaper advertisement released by the Ministry of Women Child and Development. Though, Krishna Tirath denied that the mistake was from her ministry's side, saying “the message is more important than the image. The photograph is only symbolic. The message for the girl child is more important. She should be protected." But later she admitted that the error was a result of her ministry's negligence and she apologised for it.

Climbing on the BJP Bandwagon

On January 19, 2015, Krishna Tirath formally joined the BJP. She was awarded with a BJP ticket to contest the 2015 elections to the Legislative Assembly of Delhi from the Patel Nagar constituency.
﻿ Elections Blog | Page not found