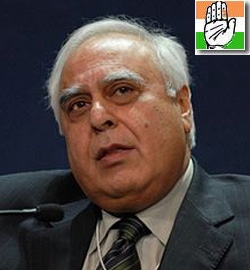 Kapil Sibal is an Indian politician. He was the Minister of Communications & Information Technology and the Union Minister of Law & Justice under UPA government. As a lawyer, Sibal has handled some of the challenging portfolios such as Additional Solicitor General of India and President of the Supreme Court Bar Association. Sibal's mettle as a politician was tested during the UPA regime when he was given the charge of various ministries including the Ministry of Science & Technology and the Ministry of Human Resource Development. Kapil Sibal was also the Member of Parliament from the Chandni Chowk constituency in Delhi from 2004 to 2014. However in 2014 Lok Sabha elections he lost the seat to Dr. Harsh Vardhan of BJP.

Sibal was born on 8 August 1948 in Jalandhar, Punjab. His father H L Sibal, was a distinguished advocate who received the title of a "Living Legend of the Law" and was also honoured with the 'Padma Bhushan'award. After Sibal did his schooling from St John's High School in Chandigarh, he moved to Delhi in 1964 and joined St. Stephen's College. After completing LL.B, he went on to earn a Masters degree in History. In 1970, he joined the bar association and three years later, he qualified for Indian Administrative Services. Despite getting an appointment, he didn't take up the assignment under the pretext of setting up his own practice.

Sibal enrolled himself at the Harvard Law School to pursue LL.M which he completed in 1977. Before joining Harvard, he got married to Nina Sibal in 1973. His sons, Amit and Akhil both are lawyers. Five years after his wife's death in 2000, Sibal married social activist Promila Sibal. His brother, Kanwal Sibal is the ex-Foreign Secretary of India.

How Did Sibal Enter Politics?

Kapil Sibal started off with his career in 1970 after joining the Bar Association. It took him 13 years to qualify as a Senior Lawyer in 1983. In less than six years, he was appointed as the Additional Solicitor General of India. In his capacity as a lawyer, he held different positions in the Government of India. Sibal also went on to become the President of the Supreme Court Bar Association in 1995. However, his political breakthrough happened in 1998, when he was elected as the member of the Rajya Sabha.

Kapil Sibal was handling the Telecom Ministry when he came under fierce criticism for stating that the exchequer incurred "zero loss" in the 2G spectrum scam. It was also during his tenure that his decision to regulate online content was antagonized across social networking sites.