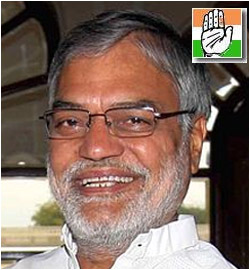 Dr. C. P Joshi, known as "C.P. Saheb" is a Congressman. He is a Member of the Parliament of India from Bhilwara in the 15th Lok Sabha.

Born on 29 July, 1950 at Nathdwara, Rajasthan, Joshi is the son of Shri Bhudev Prasad Joshi & Smt. Sushila Devi Joshi. He attained his primary and higher secondary education at Nathdwara. He did his B.A. in Law from M. B. College, Udaipur. Afterwards he completed his Masters in Physics and Psychology. He also has a Ph.D. in Psychology. C. P. Joshi has worked as a lecturer at the M. B. College, Udaipur. He has also worked as professor of psychology at Mohanlal Sukhadia University, Udaipur.

Involvement of Joshi in politics was initiated by Mohan Lal Sukhadia, popularly known as the founder of modern Rajasthan. Since then his contribution to politics has been significant.

Dr. Joshi began his political career in 1973 and gradually climbed the ladder of success. Some of his noteworthy political activities and achievements are listed below:

C. P. Joshi has also initiated several development works for Bhilwara, such as: