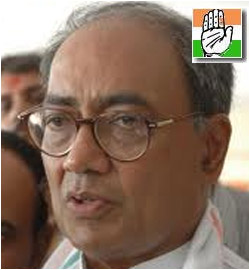 Digvijaya Singh, an Indian politician belonging to the Congress party, is a Member of Parliament in the Rajya Sabha. He is also currently a General Secretary of the Indian National Congress party's All India Congress Committee. Previously, he had served as the 14th Chief Minister of Madhya Pradesh, a central Indian state, for two terms from 1993 to 2003. He is often called as the new "Arjun Singh" by political leaders. Having lost the assembly elections of 2003, Digvijay had taken an oath that he will not take part in any election for a period of 10 years. After being absent from the political theater for 10 years, Digvijay in 2013 has been in the news for his accusations against the BJP. He has also commented on various groups like the RSS, calling it as "saffron terror".

Digvijaya Singh was born on February 28, 1947 in Indore, Madhya Pradesh. He completed his schooling at Daly College, Indore, and graduation in Mechanical Engineering (B.E.) at the Shri GovindramSeksaria Institute of Technology and Science (SGSTI), Indore. He got married to Asha Digvijaya Singh, and has a son and four daughters. On February 28, 2013 his wife lost her life to cancer. In April 2014, he confirmed that he was in a relationship with a Rajya Sabha TV anchor Amrita Rai; they married in late August 2015. He is a Hindu.