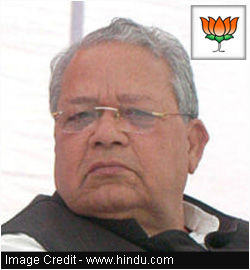 Kalraj Mishra, a famous Indian politician and a Sangh pracharak made his debut at the Centre in 2014. On May 27, he was appointed as the Cabinet Minister of Micro, Small and Medium Enterprises (MSME) under Modi's prime ministership. He is the member of the Bharatiya Janata Party (BJP) and has been associated with Uttar Pradesh politics from a very long time. He is popularly known as "happy-go-lucky Brahmin". He believes that to work for the welfare of the society, position does not matter. An effective speaker and a great thinker, he did not mind playing a second lead to his colleagues.

He was born in a Brahmin family of agriculturists on July 1, 1941. It was a middle-class family in the village of Malikpur in the district of Gazipur. To earn a living, Mishra's father used to teach students of the village. While he was pursuing his masters from Kashi Vidhyapeeth in Varanasi, his devotion towards his country kept growing. Belonging to a family of believers in Rashtriya Swayam Sewak Sangh, Mishra also joined the Sangh. By this time, he was determined to do something for his society.

In 1963 Kalraj Mishra joined RSS as a pracharak in Gorakhpur and with this started his political career. Looking at his devotion for the Sangh for five years , Mishra was posted to Azamgarh as the organising secretary of Bharatiya Jana Sangh. He was given the complete charge of political workings in Azamgarh. At every stage he proved himself to be an effective leader.

During his career he occupied many positions in the government. Apart from being the party chief, he held the portfolios of Public Works, Medical Education and Tourism. He was elected as an MLA many times and was also appointed as a Rajya Sabha member. During his tenure, he formulated the Road Development Policy in UP under which many link roads to connect villages were constructed.

He was elected as the member of Rajya Sabha thrice in 1980, 1986 and 2001. Kalraj Mishra started a campaign wherein all state highways would be made crater free. He also played a major role in the formation of Uttarakhand. By his efforts and organisational capability he was able to make a good and competent organisation.

After serving as a minister under various governments in Uttar Pradesh, Mishra fought direct elections in 2012 on the BJP ticket. He contended from Lucknow East assembly constituency and won the seat for BJP. Showing his commitment towards his constituency, he initiated many developmental projects.

Mishra won the General Elections 2014 from Deoria constituency and thereafter was appointed as a Cabinet Minister in the Modi government. In his first speech after being appointed, he said "The objective of this ministry is to make the common man self-dependent. Optimum utilisation of human resources in the MSME sector and establishing a framework for this purpose is the need of the hour and this ministry will work towards that goal. I aim to fulfil the expectations of the people". To allot Mishra with the portfolio of MSME by BJP is seen as a positive step. Mishra's experience and his association with BJP from a long time will definitely serve as a catalyst in MSME sector. MSME accounts for 8% of the country's total GDP. It is also one of the largest employment industries.

Early in his career, Mishra was inspired by the JP Movement. He worked as a chairperson of 'Sampurna Kranti' meaning Total Revolution. The movement was started by Jayaprakash Narayan in 1974 in UP. With his increasing involvement in politics, in 1978 he was appointed as the National President of the All India Janata Yuva Morcha. From here on his political graph kept growing and he finally reached the position of Cabinet Minister.