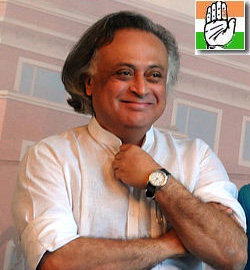 Jairam Ramesh is an economist, a politician and a senior leader of the Indian National Congress. He is a MP in the Rajya Sabha from the state of Andhra Pradesh since June 2004. He has held different portfolios and served various ministries including ministry of Environment & Forests and Drinking Water & Sanitation. As an economist, he was entrusted with several crucial roles as an advisor to the Finance Minister and also to the Prime Minister. He has also served the Planning Commission, Ministry of Industry and other economic wings of the government.

Jairam was born on 9 April 1954, in Karnataka's Chikmagalur city. His father, C K Ramesh, was a Professor of Civil Engineering in IIT Bombay. Ramesh went to St. Xavier's School in Ranchi. He was inspired by the thoughts of the Swedish economist Gunnar Myrdal and his American counterpart, Paul Samuelson. Jawaharlal Nehru's outlook and views about society, religion and culture had a deep impact on Ramesh.

After completing B. Tech in Mechanical Engineering from IIT Bombay in 1975, he went on to receive a Master's Degree in Public Policy and Public Management from Carnegie Mellon University's Heinz College between 1975-77. In the following year, he enrolled himself at the Massachusetts Institute of Technology and studied economics, engineering, management and technology policy. In 1981, he married K R Jayashree. The couple has two sons.

How did Jairam Ramesh Enter Politics?

Immediately after completing his education, Ramesh joined the World Bank for a brief time, before starting to work as an assistant to an economist, Lovraj Kumar from December 1979. He had to wait for almost two decades before he could join politics in its truest sense. In 1998, he finished his stint as an advisor to the then Finance Minister P Chidambaram. It was during the Vajpayee regime that he enrolled himself in Congress as a full-time party worker.