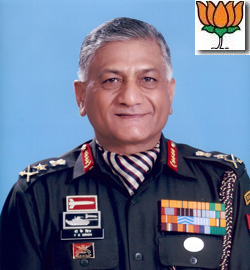 V K Singh is the Union Minister of State (MoS) for External Affairs in the Narendra Modi government. In the recent cabinet reshuffle, he lost the Department of Northeast Region (DONER) portfolio to Dr Jitendra Singh.

A retired Indian Army General who later became a Bharatiya Janata Party (BJP) member of Parliament, V K Singh recently grabbed the headlines when he said that development, not the repeal of Article 370, was the main poll plank of BJP in Jammu and Kashmir Assembly elections. It was reported by media that the BJP was going to include Article 370 in their J&K election manifesto, attracting angry reactions from all quarters within the state. However, Singh said that the BJP only wanted to re-look into the Article and nothing more than that.

As a part of Prime Minister Narendra Modi’s philanthropic ‘Sansad Adarsh Gram Yojana’ project, V K Singh has adopted Mirpur Hindu village from his own constituency and has pledged to develop a village every year during his tenure.

V K Singh was born on May 10, 1950. While his grandfather was a Junior Commissioned Officer, his father was a colonel in the Indian Army. He did his schooling from Birla Public School, Pilani. Subsequently, he got admitted to the National Defence Academy (NDA) and completed his graduation from the Defence Services Staff College. His other educational accomplishments include graduation from United States Army Infantry School, Pennsylvania Carlisle’s United States Army War College, and Rangers course graduation from Fort Benning. Some of the awards he has won during his career include Yudh Seva Medal, Ati Vishisht Seva Medal, Param Vishisht Seva Medal, and many more.

V K Singh started his career as a military officer and became the first ever commando (trained to carry out high altitude and counter insurgency operations) in the Indian Army to have been promoted to the General rank. He was part of the 1971 India-Pakistan War and Operation Pawan. Singh was the 24th Indian Army Chief and the first to drag the Union Government to court over his date of birth issue.

After retiring from his position as Chief of Army Staff, Singh became a member of the BJP. He also actively participated in the anti-corruption campaign led by Anna Hazare in New Delhi’s Ramlila Maidan. V K Singh once compared Anna’s movement with the 1975 Bihar Movement of Jayaprakash Narayan. On the issue of Nirbhaya gang rape case of 2012, which shook the conscience of the country, Singh was among the leading agitators against the crime.

Singh went on to win UP’s Ghaziabad Lok Sabha constituency in 2014 with the second highest margin of 567,000 votes by defeating INC’s Raj Babbar.

His date of birth became a bone of contention between him and the defence ministry. While the government said that it was May 10, 1950, Singh claimed it to be May 10, 1951. With the controversy snowballing beyond control, Singh took the government to court. However, the Supreme Court gave verdict in favour of the then Government.

As his tenure as Army Chief progressed to an end, Singh stirred a controversy by claiming he had been offered Rs 14 crore bribe related to Tatra Truck procurement. After the defence ministry ordered an inquiry, the secret military intelligence unit, under Singh’s supervision, was charged with illegally tapping telephonic conversation of ministry officials.

After becoming the MoS, VK Singh tried to stop the elevation of Dalbir Singh Suhag to the position of Army Chief, cleared by erstwhile UPA-II government. Singh had linked General Suhag with supporting "dacoity" by an army unit that once worked under him.
WBDB18.11.2014