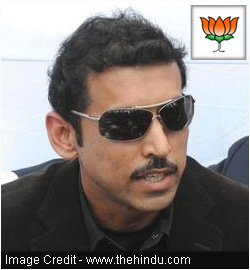 Multi-talented Rajyavardhan Singh Rathore is the new Minister of State for Information and Broadcasting. An internationally acclaimed shooter and ex-armyman, Rathore is a Member of Parliament (MP) from Jaipur Rural seat. He was included in the government when Prime Minister Modi expanded his cabinet recently.

Ace shooter Rathore was born to Col. Laxman Singh Rathore, an armyman, and Manju Rathore, a school teacher on January 29, 1970 in Jaisalmer, Rajasthan. Rathore earned laurels in the world of sports, before joining politics.

He had an aptitude for shooting since his childhood and when Rathore realised this he started refining his skills with more practice. Cricket was also his passion and he was selected to play in Madhya Pradesh cricket team for the Ranji Trophy, the gateway to the Indian national cricket team, but was discouraged by his mother, since at that time he was too young and only in class ten. Later he got selected in the prestigious National Defense Academy (NDA) and became an army man after receiving his training and education from there. It was during his posting in Kashmir while fighting against militants, that his shooting talent came into prominence.

Rathore has a long list of awards and recognition conferred upon him for both delivering exceptional services during his career as an army man and for being an outstanding sports man.

In the year 1990, when he was Major in Indian Army he was bestowed with ‘Sword of Honour’ award from Indian Military Academy.

As a sportsman, Rathore shot to fame when he won Olympic silver medal for the country in Men’s Double Trap event in 2004 Olympics held in Athens. In 2004 only, he won the world shooting championship in Sydney, Australia. His winning streak continued even further and in the year 2006, he won gold medal in Commonwealth Games held in Melbourne and another gold medal in world shooting championship held in Cairo in the same year.

He has won several prestigious awards and highest honours, such as Rajiv Gandhi Khel Ratna, Arjuna Award, the Sikh Regiment Gold Medal for being the best sportsman at Indian Military Academy and ‘Ati Vishist Seva Medal’ for his exceptional services by the President of India. He has also been bestowed upon highly prestigious honour ‘Padma Shri’.

Rathore was chosen flag bearer for India during the 2006 Commonwealth Games held in Melbourne, Australia and Summer Olympics held in 2008 in Beijing China. He has won over 25 international medals in Double Trap championship held in different countries during 2002 to 2006.

In 2013 after taking voluntary retirement from the Army, Rathore joined the BJP and was elected as an MP from the Jaipur Rural seat of Rajasthan in Lok Sabha election held in the year 2014. The state minister portfolio was given to Rathore to increase the participation of Rajasthan in the government, otherwise the Parliament had only one representative (Nikhil Chand, MoS for Chemicals & Fertilizers) from Rajasthan.

Taking note of the communication gap between the media and the government, Rathore had recently said that there is one-way communication taking place and after the new government came into power at the Centre, the scenario should be improved. Further, he also laid stress upon putting the country’s economic development on the fast track.
WBSKJ27.11.2014