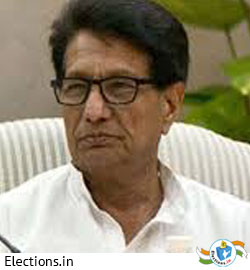 Choudhary Ajit Singh is a prominent Jat leader and the founder of Rashtriya Lok Dal (RLD) party. He started his political journey as a Rajya Sabha member. He served as a Minister of Civil Aviation from December 2011 to May 2014. In his career of 25 years, Ajit Singh aligned himself with parties of different motives and backgrounds. He has been elected to Lok Sabha seven times and also became the Union Minister for Industry and the Union Minister for Food.

Ajit Singh was born on 12 February 1939 to Choudhary Charan Singh, the former Prime Minister of India, and Gayatri Devi in Bhadola, Meerut district of Uttar Pradesh. He first did B.Sc. from Lucknow University and then opted for B.Tech from IIT Kharagpur. He is also an alumnus of the Illinois Institute of Technology, USA, from where he completed his Master of Science.

He has keen interest in agriculture and computer technology. He was a computer scientist by profession and worked with multinationals such as IBM in United States for almost 15 years before coming back to India.

He got married on 17 June 1967 to Radhika Singh and has three children. He has one son, Jayant Choudhary, who is also the member of the 15th Lok Sabha from the Mathura constituency, Uttar Pradesh.

Entry of Ajit Singh into Politics

Politics was in the blood of Ajit Singh. Even though he had no interest in politics in his earlier life, he had to join his father’s political party when the latter got very ill, on the insistence of his father’s followers. There was a huge rally organised by then District Presidents of Lokdal, and he was welcomed with a green-coloured Maruti Gypsy as a gift, after which Ajit Singh never looked back.

He was made the member of Rajya Sabha from Uttar Pradesh in 1986. After the death of his father the very next year, he was asked to step forward as the leader of the party, which was not acceptable to fellow party leaders such as Mulayam Singh Yadav and Hemwati Nandan Bahuguna. The party was then divided, separating into factions of Jats and the backward classes. With the support of Jats, Ajit Singh merged his newly formed party, Lok Dal (Ajit) with Janata Party. He won every Lok Sabha election he contested from Baghpat, which was his father’s constituency, except the one which he lost to Som Nath Shastri in 1998. In 2014 LS elections he lost the seat to Satyapal Singh of Bhartiya Janata Party with a big margin.