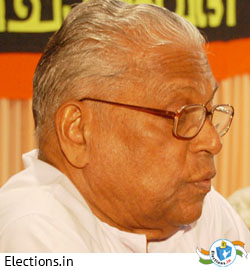 Velikkakathu Sankaran Achuthanandan, an Indian politician and one of the founding members of the Communist Party of India (Marxist), is well known for his anti-liberalism and Fabian Socialism views.

A popular mass leader, he is respected for the integrity he brought to politics. He is the former Chief Minister of Kerala (2006-11) and is currently the leader of opposition since 2011. Achuthanandan, since childhood, strongly believed in organized way of living. He always raised his voice against corruption. He is known for his dedication and simplicity. Achuthanandan has always been at the forefront for the protection of farmers and their lands, and also participated in the freedom movement, for which he went to jail in 1946.

Achuthanandan was born on 20 October 1923 to Sankaran and Accamma at Alappuzha, Kerala. He lost both his parents at a very young age and was forced to leave his studies after class 7, when he was only 11. Initially he worked at a tailoring shop with his brother and later joined a coir factory as a worker. Achuthanandan was an active member of trade union and made it a platform to enter politics. He got married to K. Vasumathy in July 1967 and has two children, V.A. Arunkumar and V.V. Asha.

Achuthanandan’s active involvement in trade union activities paved way for his entry into politics. He joined the state Congress in 1938 and started teaching and working on the organized way of agriculture to the farmers in Kattanadu. He then joined the Communist Party of India in 1940 and was under the influence of P. Krishna Pillai, who was a Communist revolutionary. Later he participated in the freedom movement and Communist movement. He raised his voice against the policies of C.P. Ramaswamy Iyer, who was the then Divan of Travancore, for the American model of government. For this, he was arrested and sent to jail for five and a half years where he was beaten up severely and had his soles pierced by the policemen as a punishment. He struggled for implementing the Land Reforms Act and was successful in 1967 when the Act was passes by the EMS government.

Achuthanandan held many positions during his long political career of 66 years, beginning from 1938. By 1957 he was made the state secretariat member of the CPI. Many a times he faced opposition and criticism from his party members for raising his voice against corruption by other leaders.

In 1962, when the Sino-Indian war was taking place, he faced demotion in the party for supporting blood donation camps for Indian soldiers. Also, disciplinary action was taken against him by the EMS government in Thalassery for his involvement in factional activities.

He is one of those 32 members of the CPI who left the party to form the new CPI(M), Communist Party of India (Marxist) in 1964.

Covid-19 in Kerala: What’s the Real Story Behind the Surge in Cases?


The South Indian state Kerala is now among the regions where the Covid-19 cases are surging daily. An analysis in the Institute of Mathematical Sciences in Chennai showed the R-value in the state is climbing rapidly. Kerala recorded an R-value around 1.11.R value shows the speed at which the coronavirus is spreading.  The rising cases […]

PM Modi Extends the Reservation Criteria for OBCs and EWS


The Prime Minister of India, Narendra Modi hailed the Centre’s decision to extend the reservation to other backward classes (OBCs) and Economically Weaker Section (EWS) for undergraduate and postgraduate medical and dental courses.  The Centre’s decision will extend from the current academic year 2021-22.According to the announcement the Other Backward Class (OBCs)  will get a […]


On Wednesday in the Indian Parliament, the opposition parties raised their voice against the widespread Pegasus controversy, farm laws, and other major issues.  Some members even hurled papers and tore placards in the house. The Central government however was successful in passing three bills. The recurring sloganeering and disruption caused by the opposition parties lead […]