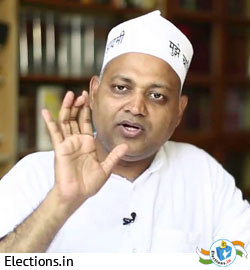 A cabinet minister in the Delhi Government headed by Arvind Kejriwal of Aam Aadmi Party (AAP) previously in 2013, Somnath Bharti is a lawyer-turned-politician. He held the portfolios of law, tourism, art & culture and administrative reforms department, though for a short tenure of 49 days.

Somnath Bharti contested the same seat of Malviya Nagar in the 2015 Delhi assembly elections too from which he stood in 2013 Delhi Assembly Elections and came out victorious as AAP swept the polls with thumping majority. Bharti took on Dr. Nandni Sharma of BJP and Dr. Yogananda Shastri of Congress and defeated them with a considerable margin. Bharti got 51,196 votes as compared to Dr. Nandni Sharma's 35,299 votes.

Somnath Bharti was born on 10 May, 1974. He spent his childhood at Hisua Bazar in Nawada district of Bihar, about 100 km from the state capital Patna. He completed his Class 10 from a local school and did his intermediate from Patna. He pursued his M.Sc. from the prestigious Indian Institute of Technology (IIT) Delhi and received a degree in law from the University of Delhi. He additionally served IIT Delhi Alumni Association as its Secretary for 2007-08 and 2011-12 and as IIT Delhi Senator in 2008 and later as the president in 2012-13. Prior to getting into law, he relished a prosperous vocation first as an academician and later as an IT consultant.

In 2009, Somnath Bharti led the movement against the abeyance of sentencing of Vikram Buddhi, an Indian PhD student at Purdue University who was confined by the United States ascendant entities in 2006 for writing against the former President of US, George Bush. Ultimately, the US equity system was forced to promulgate a sentencing within three months, after it had been in abeyance for over three years.

Being a lawyer, Bharti devoted a plethora of time in the redressal of grievances by filing Public Interest Litigations (PILs) and fighting the battles for helpless, poor and illiterate class of people.

In 2010-2013, he came in the limelight for fighting the rights of home-schooled children and subscribers of alternate edification system in view of the binding provision of the Right of children to free and compulsory education Act. In response to his PILs, the ministry of Human Resources and Development (HRD), through an affidavit, clarified that they are not against home-schooling.

Bharti was additionally involved in a campaign against the alleged interference of the then Minister of HRD, Kapil Sibal, in the Joint Entrance Examination (JEE) process for admission to IIT in June 2012. Later, the government partially withdrew the proposal. Being an activist, he also raised the issue of two deaths caused by contaminated drinking water in the National Council of Educational Research and Training (NCERT) campus in 2013.

In the 2013 Delhi state assembly elections, Bharti contested from the Malviya Nagar constituency on AAP ticket and was elected as a member of Legislative Assembly, and got the cabinet berth. During his time in office, Bharti revealed the identity of a Danish tourist who had been raped, despite the fact that revealing a rape victim's identity is illicit in India.

During the same tenure, another act of his sparked off a major controversy when he ordered Delhi police to raid an area called Khirki village of South Delhi on grounds of illegal drug trafficking. The Police refused to abide by his orders as it did not work under Delhi government's supervision but Central government. This was followed by major protests by the party and the CM Arvind Kejriwal to bring the Delhi Police under Delhi government.

On 14 February, 2014, Bharti resigned along with his other colleagues in the government led by Kejriwal, over the failure to enact a Jan Lokpal (Citizen's Ombudsman) bill.