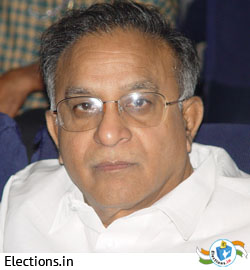 S. Jaipal Reddy, full name Sudini Jaipal Reddy is a present member of the Lok Sabha and an Indian National Congress party member. He is an elected representative of the Andhra Pradesh constituency of Chelvella and credited for holding several key positions in the Central Government. He got the portfolio of the Minister of Science and Technology following the re-election of Indian National Congress in the centre with an alliance of UPA-II.

Between 1969 and 1984 he was a member of the Legislative Assembly representing Kalwakurthy Constituency from Andhra Pradesh for four terms till he acquired his position as a Member of the Parliament. He also worked as a Chairman of Committee of Privileges from the years 1999-2000 and was a member of the Joint Committee on Patents (Second Amendment), Bill, 1999 and member of the Consultative Committee in the Ministry of Power and held several other important positions.

An agriculturist by hobby and erstwhile profession Reddy is physically disabled and needs the support of crutches to walk. He never allowed his disability to come in the way of his success He was born in Nermatta which is a small village in the Nalgonda district of Andhra Pradesh and grew up in Madgul, Mahbubnagar. He was born on 16 January 1942 to Late Shri. Durga Reddy and Smt. Yashodamma. He has three children, two sons and one daughter.

Jaipal Reddy is a very learned man and an avid reader. He completed his Master of Arts in English from the Osmania University in Hyderabad and also holds a Bachelor degree in Journalism from the same university.  Politics interested him even when he was a college student and his political journey was therefore quite natural for him.

As a student in the Osmania University of Hyderabad, Jaipal Reddy was a member of the political student organization and on two separate occasions was elected as the student leader through the university elections. He remained member of the Youth Congress between the years 1965 to1971 and during this tenure met several important Congress Party leaders. He went on to become the General Secretary for the Andhra Pradesh Congress and served in this role for almost four years. He also contested the Andhra Pradesh Legislative Assembly elections to win the assembly seat for four consecutive terms from 1969 to the year 1984. In 1979 he became a member of the National Executive Janata Party and finally entered in the mainstream politics in the year 1984 when he was elected to the Lok Sabha.

His full career graph as a politician is as follows:

Achievements of S. Jaipal Reddy as a politician

S Jaipal Reddy is famous for his fluent and powerful speeches and has been a spokesperson for several political parties that he has been a part of. He has been conferred with several awards for his outstanding works. He was the youngest parliamentarian and the first member of the Lok Sabha from South India to be awarded with the Outstanding Parliamentarian Award in 1998.

According to the signed affidavit to the Election Commission (EC), S Jaipal Reddy has a worth total Rs. 60 lakhs. He has also admitted to having a liability of approximately Rs. 54 lakhs which he accured as housing loan for house construction. . The movable assets that he owns are in the form of cash in his bank accounts and the jewellery that his wife Smt. Yashodamma owns. The asset and liability report submitted by S. Jaipal is considered to be one of the lowest among all the Rajya Sabha members and has been verified by the EC for authenticity.